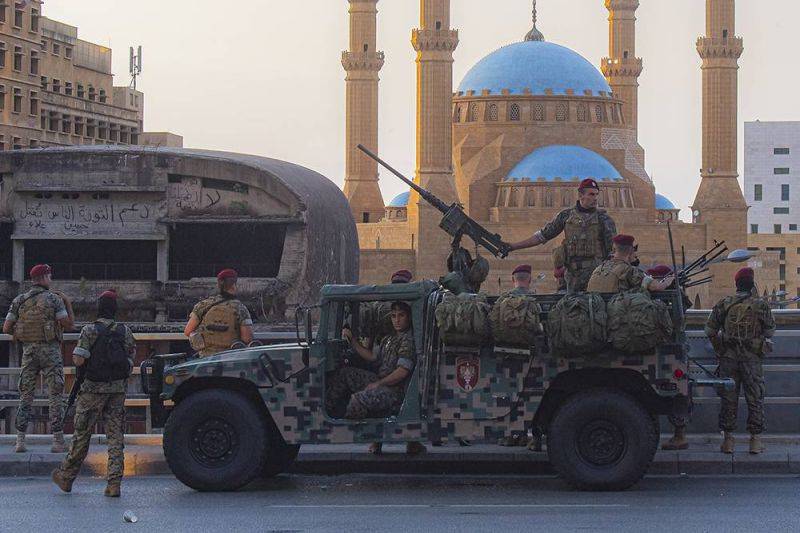 Unlike previous conferences that sought to promote the Lebanese Army’s development and professionalization, Thursday’s meeting is aimed at ensuring its survival, a source told L’Orient Today. (Credit: Nabil Ismail)

BEIRUT — While previous donor conferences held to support the Lebanese Army aimed at its development and professionalization, a virtual meeting set for Thursday is targeting something much more basic: its survival.

“We are talking about basics that are needed right now to maintain the integrity and cohesion of the army,” said a diplomatic source from France, which is co-hosting the international conference along with Italy and the United Nations.

The source said the conference’s primary aim is to coordinate assistance in the form of food and medical supplies that will help to meet “basic, urgent and humanitarian needs,” as well as spare equipment parts. The aid will not include new military equipment or hardware, according to the source.

As Lebanon has sunk deeper into an economic and financial crisis, the army — once seen as a stabilizing force — is barely able to function or pay its staff.

In an unusually outspoken speech in March addressing the political class, army commander Gen. Aoun said his soldiers were “starving,” morale is low and eroded salaries could lead to the institution’s “implosion.”

A month later, Aoun warned French Armed Forces Minister Florence that the military was on the brink of collapse, which ultimately led to Thursday’s conference, which in addition to the hosts is expected to be attended by members of the International Support Group for Lebanon, including the United Kingdom, Russia and China.

“The soldiers are suffering, like the rest of the Lebanese population,” the French diplomatic source said. “They have a direct need for the most basic things.”

“Unlike past multilateral engagements such as the Rome 1 and Rome 2 conferences, which focused on supporting development and professionalization,” this conference aims to reinforce the armed forces’ resilience and stability, says Aram Nerguizian, a senior adviser and researcher at the Carnegie Middle East Center, where he focuses on the Lebanese security forces.

According to internal army estimates seen by Nerguizian, the currency’s depreciation has forced a 94.5 percent decrease in the budget for procuring essential equipment, an 88.6 percent reduction in funding for operational maintenance and an 87 percent decline in personnel expenditures such as salaries and benefits.

The army’s press office told L’Orient Today it could not respond to questions about the forces’ current status and the upcoming conference.

However, a soldier’s monthly salary of LL1.2 million, once worth $800, is now worth less than $80, factoring in the local currency’s slide on the parallel exchange market. The decline in salaries’ practical value has been accompanied by growing reports of soldiers taking on side jobs or not turning up for work.

Last June, the army stopped feeding meat to soldiers on duty; it has since received hundreds of tons of food donations from countries including France, Turkey and Oman.

Nerguizain, who has been tracking army personnel trends for the last 15 years, said that since 2019, the armed forces have consistently seen more people leave the army than join it.

“From my conversations with junior-, senior- and mid-level officers, the drivers [to leave] are purely economical,” he said.

The Lebanese army is the largest provider of state-funded employment and benefits, as both soldiers and their families are entitled to state support.

“The army plays an important role in stability and security … and it is one of the rare institutions where there is some cohesion and diversity,” the French diplomatic source said, alluding to the army’s cross-sectarian makeup. “We want to preserve this as much as possible.”

For Nerguizian, the armed forces’ decline and the depletion of troops “could be a harbinger of instability” that hasn’t been seen since the start of the 1975–90 Civil War, when the Lebanese Army split along sectarian lines.

“At this point there isn’t really much else keeping the peace,” he said. “It’s about preserving the core, and that core is keeping these people and their hundreds of thousands of dependents out of abject poverty and preserving internal stability operations.”

Western donors, particularly the United States, also view the army as an important bulwark against Hezbollah and external forces such as Russia and Syria.

Last month, the US House Foreign Affairs Committee sent a letter to Secretary of State Antony Blinken, warning that army’s deterioration would leave gaps where Hezbollah and “other militias and criminal networks,” as well as US adversaries like Iran and Russia, could “leverage the fragmentations of the Lebanese state and society of their own gain.”

The US is the Lebanese Army’s largest donor, providing more than $2 billion in aid since 2007. At a bilateral conference in May, the US announced a 12 percent annual aid increase for 2021, bringing its financial support to a total of $120 million.

However, Nerguizian argued, it will be challenging to provide support to the armed forces without creating a “gilded class” that receives outsize assistance compared with the general population, and ensure that donations are handled with transparency and accountability.

He also said it is concerning that the army is becoming increasingly dependent on donors and foreign aid.

“At the end of the day, Lebanese national defense resourcing is a Lebanese problem and Lebanese politicians need to be involved,” he added.

BEIRUT — While previous donor conferences held to support the Lebanese Army aimed at its development and professionalization, a virtual meeting set for Thursday is targeting something much more basic: its survival.“We are talking about basics that are needed right now to maintain the integrity and cohesion of the army,” said a diplomatic source from France, which is co-hosting the...