Palestinian rights in Lebanon: ‘a humanitarian matter, not a political one’

As political parties across the spectrum decry recent events in Jerusalem and Gaza, scant progress has been made on improving conditions for Palestinians living in Lebanon 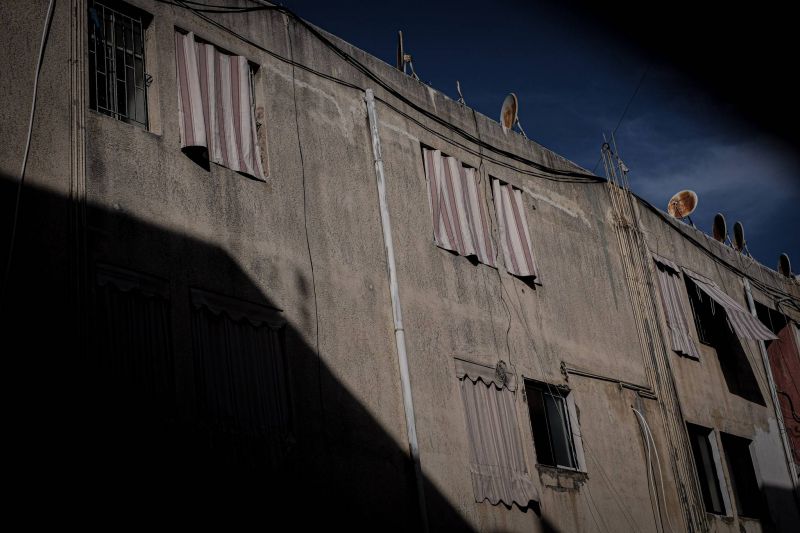 A building in the Ain al-Hilweh Palestinian refugee camp. Since 2001, Palestinians have been prohibited from purchasing real estate in Lebanon. (Credit: João Sousa/L’Orient Today)

BEIRUT — As usual when a crisis arises in Palestine, Lebanese parties across the political spectrum in recent weeks condemned the planned expulsions in Sheikh Jarrah, the use of force against worshippers in Jerusalem’s Al Aqsa mosque and the Israeli bombing campaign in Gaza. Lebanese citizens turned out for solidarity protests on the border and in the squares of Beirut, Saida and Tripoli.

But also as usual, amid calls for a free Palestine and the right of return for refugees, discussions of the refugees’ conditions inside Lebanon have been largely absent.

Palestinian refugees in Lebanon — of whom there are some 470,000 registered with UNRWA, the UN agency established in 1949 to support Palestinian refugees, but only 180,000 believed, as a result of emigration, to be actually residing in the country — exist in a state of enforced limbo, banned from owning real estate and from working in more than 30 professions.

“With the Lebanese government, we’ve taken positive steps with respect to the coordination and cooperation, but when it comes to human and social and civil rights, it’s stopped,” Fathi Abu al-Ardat, secretary-general of the Fateh movement in Lebanon, told L’Orient Today. “… There is dialogue with our Lebanese brothers, and good dialogue, and they sympathize with us, but in practice there is nothing.”

As to whether that might change amid the renewed attention to the plight of Palestine in recent weeks, he and others following Palestinian issues in Lebanon were not optimistic.

“Hezbollah thinks the Palestinian issue is only liberating Jerusalem,” said Sari Hanafi, a professor of sociology at the American University of Beirut, who has studied Palestinian refugee issues and is himself a Palestinian born in Syria. He added, “It’s not only Hezbollah …. This political formation doesn’t think that Palestine is also improving the urban conditions of the refugee camps, doesn't understand that Palestinians, after four generations being in Lebanon, need a right to work and to own properties.”

A Hezbollah spokeswoman did not respond to a request for comment on the party’s position on rights for the Palestinian refugees in Lebanon.

After the 1948 Nakba, which displaced some 700,000 Palestinians, neighboring countries took different approaches to the refugees. In Jordan, they were offered citizenship. In Syria, as in Lebanon, the refugees were not given citizenship on the logic that to do so would undermine their eventual right of return, but in other respects, Palestinian refugees have had the same rights as Syrian citizens with regards to work and property ownership.

Lebanon, where the issue of refugee rights was complicated by sectarian considerations and by the role of Palestinian groups in the country’s civil war, took the most restrictive approach, and in some cases, has even rolled back Palestinians’ rights over the years.

Before 2001, for instance, Palestinians were permitted to own property, but a law passed in that year regulating property ownership by foreigners forbade “any person who is not holding a nationality of a recognized state” from owning real estate, giving as a reason “provisions of the Constitution … rejecting permanent settlement.” The clause has been generally interpreted as applying to Palestinians, despite the fact that Lebanon officially recognized Palestine as a state in 2008.

With regards to work, Palestinians gained some increased rights in 2005, with a ministerial decree that gave them the right to work in dozens of previously banned professions. But they are still barred from professions requiring syndicate membership, meaning they cannot legally work as doctors, engineers, pharmacists or attorneys, or even as taxi drivers or tour guides.

And despite the fact that most of the Palestinians present in Lebanon were born and raised in the country, they are required to apply for work permits like other classes of foreign workers. While they were exempted from paying the permit fee in 2010, other barriers remain, including the requirement for a work contract, since many are working as daily laborers without a formal contract.

In 2019, a crackdown by then Labor Minister Camille Abousleiman on foreign workers working without permits swept up dozens of Palestinians and led to mass protests in the camps, briefly reviving the discussion of refugee rights. The issue, however, was soon overshadowed by the country’s snowballing economic crisis and the outbreak of the Oct. 17 protests.

In the absence of access to jobs and property, and with the perpetually cash-strapped UNRWA providing no financial assistance to most families, many Palestinian families in Lebanon rely on relatives who have traveled abroad to send remittances home.

Sabah al-Ajiz, a refugee who has lived all her life in Burj al-Barajneh, joined a group of Lebanese and Palestinian protesters marching through Beirut on Thursday. She told L’Orient Today, “Our brothers and sisters in Germany, in Denmark, in Sweden, they are supporting us, because we don’t have the right to anything in this country.”

The right of return

There is one right that is universally agreed upon across all Lebanese political parties and among the refugees themselves: the right of return.

Newly appointed caretaker Foreign Minister Zeina Akar made a point of mentioning while outlining her foreign policy priorities on Monday, that “Lebanon adheres to the right of the Palestinians to return to their homes and has refused resettlement in accordance with the preamble of the Lebanese constitution.”

The refugees themselves are quick to assert the same principle.

“We’re not asking to be given citizenship, we’re asking for the right of return — we want to return to our country,” Ajiz said.

But many Palestinians do not agree that granting property or labor rights would undermine that right, as has been argued by Lebanese political factions on various occasions. The ban on Palestinians owning property, for instance, was predicated on the need to prevent permanent settlement. Free Patriotic Movement leader Gebran Bassil has based his opposition to allowing Lebanese women married to Palestinians to pass on citizenship to their children on the Palestinians’ right of return.

“I think it’s absolutely only in Lebanon they put it in a sharp dichotomy: right of return or basic human rights of integrating four generations into the place where they live,” Hanafi said.

Abu al-Ardat also rejected the idea that Palestinians in Lebanon would give up their national identity if afforded more rights.

BEIRUT — As usual when a crisis arises in Palestine, Lebanese parties across the political spectrum in recent weeks condemned the planned expulsions in Sheikh Jarrah, the use of force against worshippers in Jerusalem’s Al Aqsa mosque and the Israeli bombing campaign in Gaza. Lebanese citizens turned out for solidarity protests on the border and in the squares of Beirut, Saida and Tripoli.But...

‘Simplicity and solidarity’: An Italian feast in Lebanon reveals the shared fundamentals of the countries’...

Why Lebanon hasn’t reformed its school curricula in 25 years

Three actions against banks by depositors in Lebanon, negotiations underway