Parliamentarians have finished drafting a reform bill that could end political interference in the judicial system. This was the penultimate step before the draft law is submitted to Parliament. 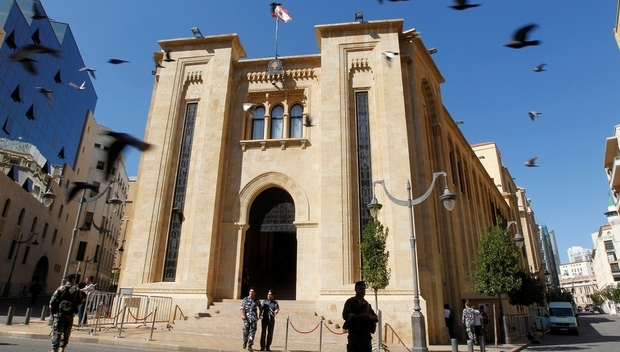 Has Lebanon just taken a step toward loosening the political forces’ hold on the judiciary?

Parliament’s administration and justice committee has finished drafting a reform bill aiming to boost independence and transparency in the judiciary. This came more than two and a half years after the bill was proposed by a team of nine MPs.

The draft law — which was initially prepared by Legal Agenda, an organization working to clean up the judiciary in Lebanon — must now be approved by the entire committee, chaired by MP Georges Adwan (LF/Chouf), before being submitted to the general assembly.

“It is a visionary bill. It was inspired by practices in international democracies,” Adwan told L’Orient-Le Jour. The MP enumerated progress on draft amendments, which he said would considerably reduce the political interference and cronyism that usually take place in the appointment and work of Lebanese judges.

The amendments include provisions whereby the judges would elect seven of the 10 members of the Supreme Judicial Council, an administrative body that oversees Lebanon’s court system, while under the present system the government appoints eight of its 10 members. At the financial level, the council would be allocated a separate budget that would be part of the Justice Ministry’s budget.

“This will help resolve the big financial problems [the Supreme Judicial Council] is facing, because its funding requests have been largely overlooked,” Adwan said.

Moreover, the role of the Judicial Inspection Authority, which adjudicates allegations of wrongdoing, would be enlarged so as to lead to greater oversight of judges, as inspectors would be dispatched across the country to monitor their work.

Additionally, the Judicial Inspection Authority would evaluate judges based on a series of productivity criteria — including attendance or number of verdicts issued. All of the information would be collected in a file recounting the work of each magistrate.

“Based on that, magistrates would be chosen by the judges to fill vacant posts based on objective criteria for competency, rather than interpersonal relationships,” Adwan added.

In the same vein, the bill would empower the Judicial Inspection Authority to suspend magistrates who were referred to the disciplinary council for alleged wrongdoing, without the justice minister’s consent, which is currently required.

“I am not against getting this power pulled out of the minister’s hand, given that the minister is a political authority. Matters relating to the judiciary need to be kept within the judiciary,” caretaker Justice Minister Marie-Claude Najm told L’Orient Le-Jour.

However, she said she strongly supports a reform bill and urged that in case the committee makes amendments to the initial text, it nevertheless preserves the bill’s essence.

A slow and opaque committee

Nizar Saghieh, a lawyer and Legal Agenda’s executive director, says he is suspicious of Adwan’s praise of the draft law, particularly because he previously proclaimed 2019 as the year of the judiciary’s independence.

“All of this will remain really nothing but words as long as we have not received the text,” Saghieh told L’Orient Le-Jour. “Nevertheless, now is the right time to make adjustments, if necessary.”

A variety of criticisms have been leveled against the committee, which has had the bill for review since 2019. First, the committee has been working really slowly. Adwan contends that the nationwide uprising that began in October 2019, the COVID-19 pandemic and the August 2020 Beirut port explosion, which destroyed many offices, delayed its work.

“Despite all that, we worked hard to finalize this bill. The work that we have put into that proves that we are committed to submitting it” to Parliament, Adwan said.

Second, suspicions that the committee lacks transparency have mired its work.

Legal Agenda, which was invited to only one of the debates on the draft bill and boycotted it, criticized “the secretive” approach of the parliamentary committee, whose debates are not open to the public. The NGO said such practices contradict the principles of democracy. “We submitted the draft law to the MPs, and their duty is to communicate with us what they have done with it,” Saghieh told L’Orient Le- Jour.

Nevertheless, Adwan’s announcement of the upcoming examination of the text by the administration and justice committee is an important step in realizing the demands of civil society actors who have long advocated for cleaning up the judiciary and Lebanese who demanded an independent judiciary during the 2019 uprising. Yet even if it is adopted by Parliament, such a measure’s implementation on the ground is not necessarily guaranteed.

Moreover, on the eve of such a major reform, organizations such as Legal Agenda that are keen on including all the items that would guarantee the judiciary’s independence insist that amendments drafted by the MPs be subjected to a thorough examination based on international criteria. Similar to Tunisia and Eastern European countries following the fall of the USSR, Legal Agenda is pushing for a legal opinion from the Venice Commission, a European body that assists states wishing to bring their legal and institutional structures into line with international standards and experience.

“The draft amendments listed by MP Adwan require a great deal of thinking. We cannot simply judge them [without having full access to them]. The justice field is very tricky. It is necessary to study all of the nuances. There is always small trickery that could bring us back to square one,” Saghieh said.

Has Lebanon just taken a step toward loosening the political forces’ hold on the judiciary?Parliament’s administration and justice committee has finished drafting a reform bill aiming to boost independence and transparency in the judiciary. This came more than two and a half years after the bill was proposed by a team of nine MPs.
The draft law — which was initially prepared by Legal...