What is Hezbollah’s take on the escalation across the border?

The Shiite party believes that Hamas is scoring points for the “axis of resistance” — the political alliance among Iran, the Syrian government and Hezbollah — in the ongoing round of fighting between Israel and the Islamist movement 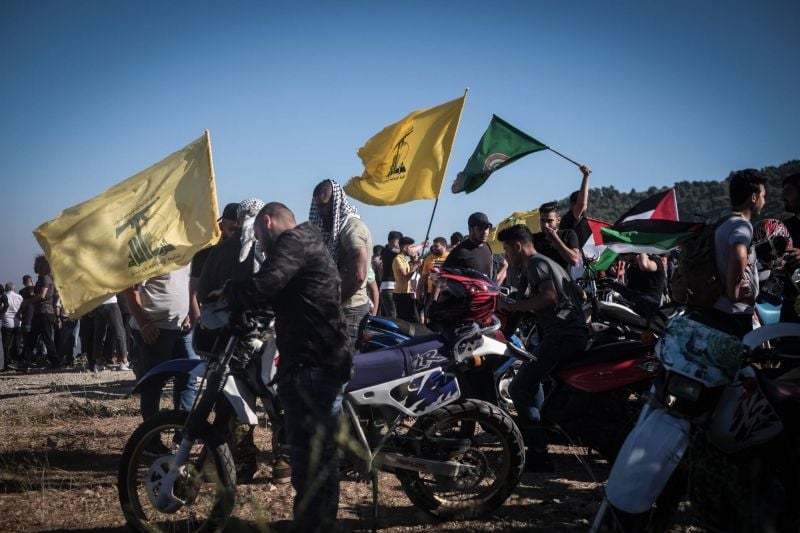 Hezbollah flags are seen at the Lebanese border with Israel on Saturday, May 15. (Credit: João Sousa/L’Orient Today)

On Thursday, May 13, Lebanon held its breath when three missiles were fired from the country’s south into Israel.

Tension subsided when it was later paradoxically revealed that there was a will among Lebanese political parties, notably Hezbollah, to remain on the sidelines of the Israeli-Palestinian conflict for the time being.

The firing of rockets was merely a show of solidarity on the part of a Palestinian faction in Lebanon that is close to Hamas. There was no intention to flare things up on the Lebanese front.

The missiles were fired toward the Israeli coast in such a way that would not warrant a response by the Jewish state. The individuals behind them were arrested by Lebanese authorities.

Hezbollah denied any involvement in the incident.

“There is general consensus to avoid escalation,” a source close to the Shiite party told L’Orient-Le Jour.

Just like in the 2014 war on Gaza, Hezbollah does not intend to become directly involved in the conflict.

The party appears to be sticking to rules of engagement laid out by Secretary-General Hassan Nasrallah on several occasions: Any Israeli strike against Hezbollah in Syria will be met with a strike from Syrian territories; if a party member is killed, Hezbollah shall retaliate from anywhere, be it from Syria or Lebanon.

The Israeli Army was slated to put on the greatest military exercise in its history in May, including the mobilization of troops along the northern border with Lebanon.

Hezbollah had gone on alert, deploying military units along the border and readying missiles to be launched in the event of an escalation.

According to information gathered by L’Orient-Le Jour, Israel sent, via the Russians, a message to Hezbollah that the military exercises were not intended to provoke it.

The military drills were eventually called off on their second day due to the outbreak of hostilities with Hamas and Palestinian protests inside occupied Palestine and Israel.

A pragmatic choice for Hamas

Hezbollah is closely watching as an indirect party to the conflict as events unfold across the border.

Hamas’ military capabilities, which the party sees as being part of the “axis of resistance” — the political alliance among Iran, the Syrian government and Hezbollah — and Israel’s response indicate that a possible direct confrontation may be on the offing.

For Hezbollah, the axis of resistance has scored points against Israel because Hamas’ rockets were able to reach Tel Aviv despite the country’s Iron Dome missile defense system.

The pro-Iran party, however, stresses that its military capabilities are far superior to those of Hamas, enabling it to inflict even heavier losses on the Jewish state.

According to most analysts, Iran and Hezbollah have played a pivotal role in upgrading Hamas’ armament.

The Islamist movement and the Shiite party maintain fairly close ties, which were, however, strained during the Syrian war.

Hamas’ political branch sided with the Syrian revolutionary forces, and Khaled Meshaal, the movement’s former leader, left Syria, where he had been based since 2012. Hezbollah joined the fighting in 2013 in support of Bashar al-Assad’s regime.

The relations between the two sides thawed as the Syrian opposition groups were defeated militarily and when Ismail Haniyeh, the chief of Hamas’ politburo, visited Lebanon in September 2020 and was received by Nasrallah.

“The party is working to restore ties between Hamas and the Syrian regime,” the source close to Hezbollah said.

Saleh al-Arouri, a top Hamas military leader, has been living in the southern suburbs of Beirut, a Hezbollah stronghold, in recent years.

Naim Kassem, Hezbollah’s no. 2 man, visited Hamas’ offices in Beirut on Saturday, May 15, to reassure the leaders of the Palestinian Islamist movement that the “resistance” stands by their side.

“What is currently taking place comes in the framework of restoring and reinforcing the ties between Hamas and Hezbollah,” the source said.

“This is further proof that the resistance is here to stay, and it will remain the only option in the face of the Zionist occupier,” he added.

For Hezbollah, the Hamas missiles that hit Tel Aviv were a political message to Iran, stressing the movement’s alignment with the axis of resistance.

According to the source close to Hezbollah, Haniyeh had sent a letter to the supreme leader of the Islamic Republic just before the outbreak of the fighting with Israel.

“There are differences within Hamas itself. Some [of the movement’s leaders] believe that banking on Iran is a pragmatic rather than a strategic choice, given the absence of any alternative and in light of the pressure facing Hamas from the Palestine Liberation Organization and several Arab countries,” a source close to Hamas said.

The war in the Gaza Strip is unfolding against the backdrop of ongoing negotiations on several fronts: between the United States and Iran in Vienna, and between Riyadh and Tehran in Baghdad.

Iran’s detractors accuse it of seeking to use the Hamas card in the talks with Washington.

An Arab diplomat, speaking on condition of anonymity, said, “The movement does not follow Iran with blind obedience, as it is also affiliated with Egypt, Turkey and Qatar.”

From Hezbollah’s point of view, Hamas has no choice but to fully rally around the axis of resistance if it wishes to stand up to Israel.

The fact that the Palestinian cause is retaking center stage in Lebanon and elsewhere is also playing into the hands of the Shiite party. It comes as a great reminder of the core of the party’s rhetoric, placing it in a more comfortable position on the Lebanese and regional levels.

On Thursday, May 13, Lebanon held its breath when three missiles were fired from the country’s south into Israel.Tension subsided when it was later paradoxically revealed that there was a will among Lebanese political parties, notably Hezbollah, to remain on the sidelines of the Israeli-Palestinian conflict for the time being.
The firing of rockets was merely a show of solidarity on the part...