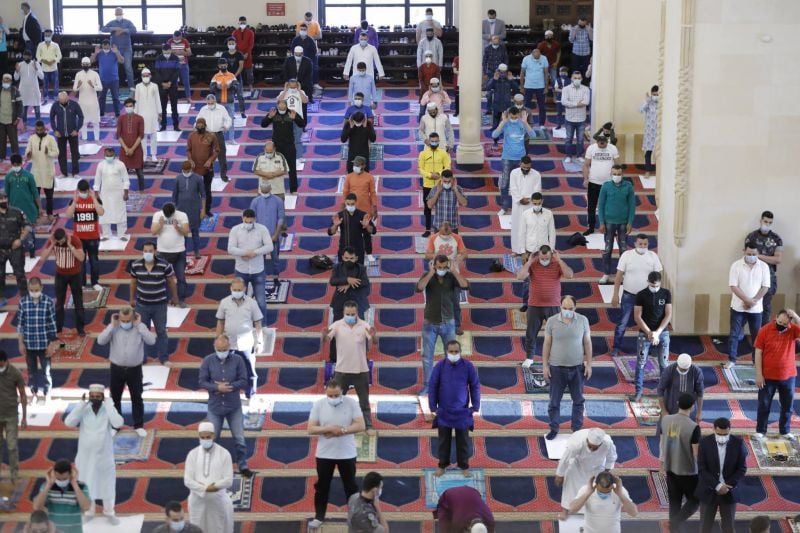 As the ramifications of Lebanon's economic and COVID-19 crises are laid bare, Muslims across Lebanon are marking the end of the holy month of Ramadan differently this year. (Credit: Marc Fayad)

BEIRUT — For most of her life, Maya has known how the first day of Eid al-Fitr will unfold: family breakfast, the donning of new clothes bought especially for the holiday, lunch with a view at a restaurant in the mountains and then on to her grandparents’ house for dinner with the extended family.

But this year, the 22-year-old university student says, the holiday, which marks the end of the Muslim holy month of Ramadan, will come with “observable differences.”

“This year we will not be able to eat outside [at a restaurant], because of the lockdown coupled with the increase in prices,” Maya explained.

The Lebanese authorities have imposed a two-day total lockdown over Eid al-Fitr in an effort to deter large gatherings where COVID-19 could easily spread. The government enacted similar lockdowns for both the Catholic and the Orthodox Easter holiday weekends.

Maya admitted that her family “will break the lockdown rules and visit our grandparents” but said, “We won’t hold a feast as per usual. Each family member will [instead] bring a dish to the table.”

Such adjustments this Eid are not unique to Maya’s family. Across Lebanon, Sunni and Shiite Muslims alike are adapting how they celebrate the end of Ramadan in light of a new economic and social reality.

Since Eid al-Fitr in 2020, Lebanon’s triumvirate of crises — political, economic and health — has worsened. The country is now in its 10th month without an empowered cabinet. The value of the national currency has hit historic lows, and shortages of fuel, power and basic goods are now commonplace. While COVID-19 indicators have improved in recent weeks, coronavirus units at the country’s hospitals were repeatedly pushed to their limits during the first three months of 2021, and health professionals have warned of the risk of another surge amid a slow vaccination campaign.

As the country collapses, religious holidays continue to be marked, but with sacrifices.

While in previous years many households held large meals with tens of guests to mark the end of monthlong dawn-to-dusk fasting, this year guest lists are being cut, or entirely eliminated.

Zeena, a 35-year-old housewife in Beirut’s Ain al-Mreisseh, said she will be spending this Eid at home, with no invitations extended to family or friends. The budget Zeena has for her Eid meal simply won’t enable her to cater for a large group.

Eid al-Fitr has traditionally been a lavish affair, with preparations started weeks in advance. After abstaining from foods and the bounties of life for a month, Sunnis and Shiite alike would storm supermarkets, butcheries and patisseries to go all out for meals for the occasion.

This year, though, Ahmad, a 55-year-old owner of a butcher shop in Hamra, said customer numbers had fallen. For those still coming, orders have changed.

“People are not ordering meat for barbecues or the more expensive meats such as lamb meat and turkey used in festivities,” Ahmad told L’Orient Today. They are ordering only lower-quality meats, such as those suitable for cooking in stew.

And although the lockdown decision allows restaurants and sweet shops to operate their delivery services during the Eid, some people, mindful of their financial resources, are baking their own sweets.

Sanaa Jaber, a mother of five, who lives in the southern suburbs of Beirut, is one such person. “This Eid I will bake sweets at home because of the hike in prices,” she said.

On the one hand, Sanaa can't afford to buy sweets from the patisserie. On the other hand, she does not want to deprive her children of Eid al-Fitr’s maamoul, a traditional Lebanese shortbread typically stuffed with dates. The compromise is to bake the maamoul herself.

Looking one’s best for Eid al-Fitr’s social events has traditionally been as important as the food, and over the years this has given rise to what is known as the Eid outfit — a new set of clothes bought especially for the day. But just like buying more expensive meats, spending on clothes has been sacrificed in the face of the economic crisis.

“Priorities have changed. People prefer spending on food to spending on clothes,” said Katia Yamout, who owns a clothing store in Mar Elias.

Shop owners used to look forward to Eid al-Fitr because it meant good sales, Katia added. And although last year witnessed a noticeable decline in sales during the Eid period — as the reality of the financial crisis was beginning to set in and the COVID-19 pandemic set in — sales have dropped only further still.

“This year I have four or five customers come in per week, whereas in past years I’d have countless groups of people come in per day,” Yamout said.

Samia, who works as an office assistant and lives in Tariq al-Jadideh, said that ever since she was a child, her parents would buy her new clothes for the Eid. This, she said, was how she “was brought up.” The tradition meant so much to her that she continued it with her own children.

“I was able to carry on this tradition with my kids, until this year,” she said. “I went shopping last week to discover that one T-shirt for kids now costs LL150,000, which is way above our capabilities.”

The monthly minimum wage in Lebanon is LL675,000, and the dollar, which is officially still pegged to the lira at LL1,507.5, is presently trading on the parallel market for about LL12,500.

Back in Maya’s household, the Eid outfit shopping trip has not been eliminated completely, but it has been adjusted to better suit the family’s financial situation. “I did not get an Eid outfit, nor did my parents,” Maya explained. “We got only one or two items to feel festive and to hold on to at least one of our Eid traditions.”

But regardless of the nature of the food on families’ and friends’ tables this Eid, and whether diners are dressed in old or new clothes, Maya remains positive: “While there seems to be nothing to celebrate this year, let’s celebrate the smallest of blessings, such as our health and well-being.”

BEIRUT — For most of her life, Maya has known how the first day of Eid al-Fitr will unfold: family breakfast, the donning of new clothes bought especially for the holiday, lunch with a view at a restaurant in the mountains and then on to her grandparents’ house for dinner with the extended family.But this year, the 22-year-old university student says, the holiday, which marks the end of the...