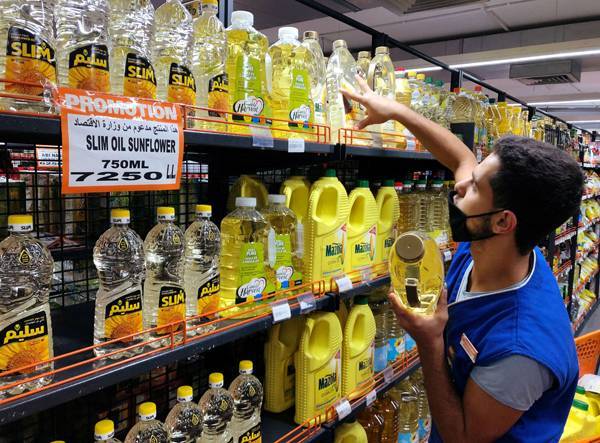 An employee stocks cooking oil at a supermarket in Beirut in October 2020. (Credit: Reuters)

It is undeniable fact that before Oct. 17, 2019, we lived in a different country — a different world — than the one in which we live now. We are now in uncharted territory, where so many familiar landscapes have become nightmarish distortions of themselves.

For example, what I had not anticipated about living in this economic collapse is how it would turn routine errands into emotionally exhausting ordeals. The mere anticipation of a trip to the bank now sets me to rattling with anxiety. Once there, it is rage that takes over. Rage and humiliation. To shuffle up before the teller, to ask quietly for what is mine as though it were not, to be aware that I have simply accepted the banks’ monstrous theft of our money — it is humiliating. But then here are the tellers smiling like everything is normal as they tell you, “No, sorry, you may not,” and here we all are, politely in line, thanking the tellers as though they weren’t the lowly enforcers following the banking mafia’s orders, and I want to rip out the nearest bench from its bolts and set to smashing everything, screaming bloody murder the whole time. Once back home, I can do nothing for a few hours. I am mentally and physically spent.

Somehow worse than a trip to the bank, however, is the trip to the supermarket. There, there is also rage (there is always rage), but its fire is overwhelmed by the waves of panic and despair that nearly knock me off my feet in the aisles. The prices change so quickly and so much, I feel I’m losing my grip on time, on reality. How can cooking oil be LL80,000? Wasn’t it LL50,000 last week? Or was that last month? (How much did it cost in the old world, the world I remember less and less?) How much will it cost tomorrow? (What will tomorrow even look like?) If yesterday’s outrageous price becomes today’s longed-for bargain, should I buy this oil now, even though I haven’t quite run out yet, because next time it might cost in the millions?

I place the oil into my cart and the worst, most vast feeling of all overtakes me, the one that makes me dread the trip to the supermarket most. Guilt. I feel guilty that placing the oil into my cart is such a simple act for me. Though I have choked back anxiety at the price, though I have made panicked calculations in my head about best value for money, I am acutely aware that I don’t need to wait in line for subsidized oil (or sugar or flour), hoping they don’t run out before I get to the front of the line, or fearing that some burly man will snatch what I get out of my hands before I can make it to the cashier. I am also aware that there are others for whom even the subsidized goods are out of reach. And the name for that awareness is guilt.

The guilt comes packaged with every item I place into my cart, whether out of indulgence or necessity. I put the guilt away into the cupboards and the fridge as I put away the groceries, but it is so huge, it spills over into the rest of the house. Guilt infuses everything: It is the chief taste in the food I make, and though I swallow it down with every bite, there is always more of it on the plate.

I’m not the only one feeling this way. Amid the avalanche of distress that comes pouring out of people — friends, family, even strangers on social media — when they try to describe how they’re feeling living through this seismic shift in reality, nearly everyone mentions feeling guilty. It is not survivor’s guilt. It is survival guilt. Any avoidance of suffering surrounded by so much suffering feels undeserved, and there is very little joy to be had anymore that doesn’t come inflected with the awareness of someone else’s misery.

When I was a child during the Civil War, Hamra Street, much as now, was full of destitute people. Many had grievous injuries. Many were children or elderly. It hurt me to see them. At the dinner table I would push away my food. I would demand why: Why did I have food when they did not? Why did I go to school when those children did not? Again, I was not the only one: My younger brother would often come home from an errand with my mother crying inconsolably. Many friends have described feeling the same sorrow when, as children, they encountered the awful unfairness of the world laid bare. Now I hear my friends’ children asking that same “why?” and receiving the same deficient “because” we all got. “Because, this is just how things are.” That “because,” repeated over years, by adults, by the world itself simply being what it is, becomes a kind of numbing agent. We stop noticing gargantuan inequality, or rather, we stop feeling so wounded by its every instance. That searing certainty that so many of us had as children — that this is not the way the world should be — mutates, instead, into a vague sense of unease that we are taught to interpret as personal.

Much has been written about how capitalism functions in such a way so as to individualize feelings of inadequacy for what is essentially systemic failure. We feel exhausted, lonely, burned out, guilty, worthless for not being able to work hard enough, see our friends enough, earn enough, provide enough, even be enough. Meanwhile, the system is rigged so that any sense of enough, whether material or psychological, is always out of reach. But because we have been directed to believe that this feeling is private, that we alone are responsible for making peace with it, we are ready to swallow the lie that individual action — recycling, becoming more “ethical consumers,” finding a better job, self-improvement, acts of charity — might help us do so. But this has never been true.

Increasingly it seems to me that the collapse of our economy is also the collapse of this great illusion. We are now relentlessly confronted with things as they are. For every trip to the supermarket I made in the old world, there were always in this country countless families starving at bare tables. I was simply able to not have to think of them constantly, and thus able to forget how their unhappiness is a part of mine. This is now impossible.

I think this guilt we all feel is the phantom pain where community and communal feeling have been amputated from us. Where, in a better world, the relationships, networks and systems meant to equitably support every member of society would be. So I do not want to grow numb again to this guilt. I live on the hope of finding a way to turn it outward, to join it to the guilt, the rage, the humiliation of others, so that these together might eventually build into the transformative force that can bring about that better world — the one we knew to long for as children.

Lina Mounzer is a writer and translator in Beirut. Her column appears monthly in L’Orient Today and L’Orient-Le Jour.

It is undeniable fact that before Oct. 17, 2019, we lived in a different country — a different world — than the one in which we live now. We are now in uncharted territory, where so many familiar landscapes have become nightmarish distortions of themselves.For example, what I had not anticipated about living in this economic collapse is how it would turn routine errands into emotionally...

Sayrafa and dollar payouts: Pulling rabbits out of a hat