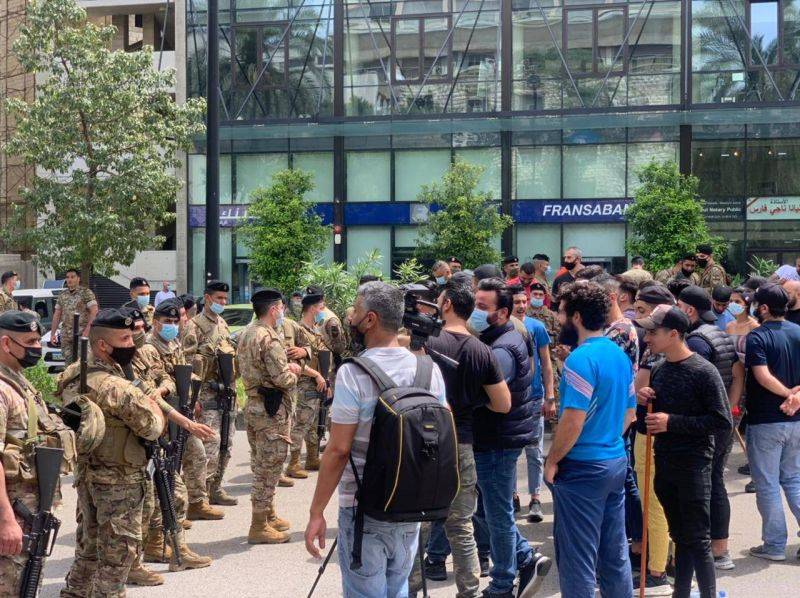 BEIRUT — A public spat between two leading Lebanese judges saw supporters from both sides take to the streets Monday in the latest incident highlighting the increased politicization of the country’s judiciary.

Dozens of demonstrators held a sit-in outside the Justice Palace in Beirut in support of Judge Ghada Aoun, while another group gathered to back Judge Ghassan Oueidat. Intermittent clashes between the two camps ensued.

The demonstrations came two days after Ghada Aoun carried out a second raid on a money exchange’s offices in Awkar in defiance of a senior judiciary decision dismissing her from an investigation into possible financial crimes and currency export breaches.

Accompanied by State Security officers and a group of activists from the Free Patriotic Movement, the party founded by the president, Aoun raided Mecattaf Holding Group’s money exchange offices on two consecutive days. The offices had already been sealed with red wax, subject to her investigation. Aoun alleges that Mecattaf had refused to provide her with details of currency transfers on behalf of banks.

Making her way out of the Mecattaf offices on Saturday, after spending nearly three hours there in the company of financial experts, Aoun announced to her supporters that she had “obtained the data needed,” promising that the investigation would resume on Tuesday.

Oueidat argued that Aoun failed to follow due process and adhere to his “directives in the investigation in accordance with article 16 of the code of criminal procedure.”

“Legally speaking, Oueidat has the right to dictate what files are allocated to which judge,” Dr. Antoine Sfeir, a lawyer, professor and expert in constitutional law, told L’Orient Today.

Aoun was investigating Mecattaf and SGBL for allegedly withdrawing dollars from the market and shipping the funds abroad. At the same time, she charged Salameh with dereliction of duty and breach of trust in respect to his use of dollars that were allocated for subsidizing basic goods.

Banking operations following the financial collapse of 2019 have yet to be regulated as no capital control law has been implemented.

On Monday, however, Oueidat asked Financial Prosecutor Ali Ibrahim to follow up on alleged violations by the Mecattaf Holding Group, the NNA reported.

The Supreme Judicial Council, an administrative body that oversees the court system, is expected to hold talks with Aoun on Tuesday morning to discuss her refusal to comply with Oueidat's dismissal order, a judicial source told L’Orient Today.

Speaking on Saturday, caretaker Justice Minister Marie-Claude Najm blasted the public spat, saying that Oueidat's dismissal of Aoun and the fallout “go beyond a dispute between two judicial authorities” and are evidence of the judiciary's politicization.

“The feud signals a massive problem for our judicial system, which has struggled to hand down convictions in a number of corruption cases given a lack of independence,” Sfeir said.

Najm also called on the Judicial Inspection Authority, which consists of 10 members, to review Aoun’s dismissal.

“It is up to the Judicial Inspection Authority, a supervisory body, to initiate any process of control and investigation and to refer to the disciplinary council the judges who have been at fault,” Najm told our sister publication L’Orient-Le Jour.

Power-sharing in Lebanon is split along sectarian lines and the justice system is no different.

Oueidat is seen as close to Prime Minister-designate Saad Hariri, a fellow Sunni, while Aoun is considered an ally of the president — both are Maronite — playing into the wider sectarianization of the country and repeatedly undermining the judiciary’s objectivity, Sfeir said.

“The feud mirrors the other confrontations we are witnessing in terms of politics, finance and the economy,” Sfeir said, adding that it was inevitable that such a conflict would reach the judiciary.

Ghada Aoun, along with the FPM, has championed the fight against corruption in the banking sector and the central bank, at least publicly, accusing political opponents and Oueidat of stifling her efforts.

The decision to dismiss Aoun comes amid Lebanon’s worst economic crisis in decades, compounded by the president and premier-designate’s ongoing failure to form a government.

The FPM and the Future Movement, the party headed by Hariri, have traded barbs since Hariri was designated in October 2020 to form what would be his fourth government.

In what was perceived as a tacit endorsement of Aoun, the president’s son-in-law and MP Gebran Bassil vowed to “continue to expose every file in our fight against corruption” while calling for “an honest judiciary that pursues people’s cases in the face of some corrupt judges who hide, neglect and block files.”

The Future Movement meanwhile was widely understood to be criticizing Aoun and the FPM in its statement describing the events of the past two days as a sign “of the attempts to complete the coup against the constitution and democratic systems.”

BEIRUT — A public spat between two leading Lebanese judges saw supporters from both sides take to the streets Monday in the latest incident highlighting the increased politicization of the country’s judiciary.Dozens of demonstrators held a sit-in outside the Justice Palace in Beirut in support of Judge Ghada Aoun, while another group gathered to back Judge Ghassan Oueidat. Intermittent...