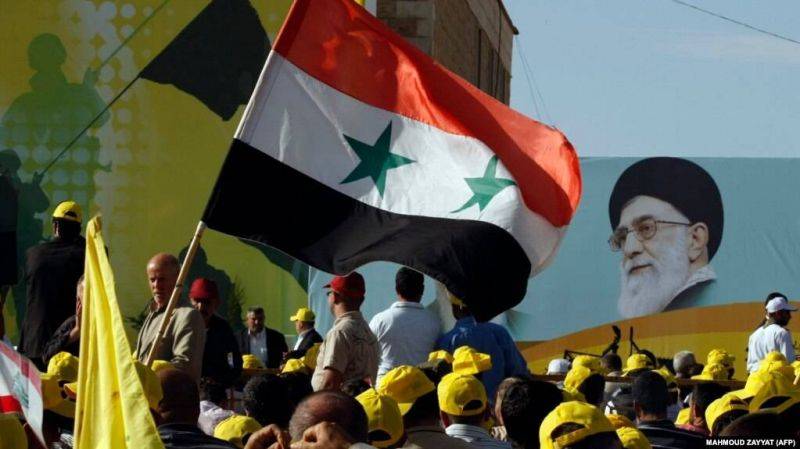 Lebanese supporters of Hezbollah wave a Syrian flag under a portrait of the Supreme Leader of the Iranian Revolution, Ayatollah Ali Khamenei, during a rally in the town of Bint Jbeil in May 2012. (Credit: Mahmoud Zayyat/AFP)

His name was Lokman Slim. He was 58 and the victim of a cowardly assassination on the night of Feb. 3–4 in a crime that is widely blamed on Hezbollah in South Lebanon.

His name was Lokman Slim. He was an erudite and courageous Lebanese intellectual, and his freedom of speech bothered all those who, for decades, had indulged in a rhetorical masquerade called mumanaa.

His freedom of speech disturbed all the local architects of this political hostage-taking situation, which from Beirut to Baghdad, passing through Damascus, perfectly illustrates the famous quote of George Orwell: “War is peace, freedom is slavery, ignorance is strength” — to which we could add: “Connivance is resistance.”

Because the mumanaa — which sometimes translates as “recalcitrance” and is derived from the Arabic term “to prohibit from,” denoting all forms of non-military rejection, confrontation and resistance — reflects first and foremost a strategic ruse of the Syrian regime since the time of the late Syrian President Hafez al-Assad.

This ruse aims to keep Syria in a state of war, in the name of the struggle against Israel, without any intention of actually leading it.

Today, it is more generally associated with the justification by the so-called resistance axis, led by Iran, of all the crimes committed in Syria, Iraq or Lebanon under the pretext of fighting the “American Zionist” hydra.

The 10th anniversary of the Syrian uprising is an occasion to address this: the Syrian regime adopted a pro-Palestinian stance just to keep subjecting the population to emergency law and drastically restrict their freedoms.

In fact, since 1974, the regime has not fired a single bullet at Israel, despite the latter’s annexation of the Golan Heights.

It instead massacred and allowed the massacre of hundreds of Palestinian civilians, whether in Tel al-Zaatar in 1976 or during its 1983 Tripoli war against the loyalists of the Palestinian Liberation Organization or during the siege of the Beirut camps in 1985 and 1987.

This is not to mention the regime’s relentless maneuvers to divide the Palestinian national liberation movement and subdue its leadership.

What’s more, the regime has arguably killed, over the past decade, more Palestinian refugees in Syria than the “Zionist entity” did in Palestine over the past two decades.

In 1991, Syria, the self-proclaimed spokesperson for Arabism and anti-imperialism, was not reluctant to take part in the Gulf war against Iraq under the aegis of the United States, which garnered tidy profits: a flood of Saudi financial aid and the green light to sway hegemony on Lebanon.

Many are fed up with this confidence trick.

In Lebanon, where a corrupt and seemingly indestructible class rules, where Hezbollah watches over the status quo and where more than half of the population now lives below the poverty line, you must, at all times, make sure to think, breathe and behave in such a way that those in power do not perceive you as being in the pay of the “American-Zionist” axis.

But how have they contributed, throughout the previous decade, to the fight against this axis?

Their greatest feat of arms has been the support of a regime that crushed Lebanon for almost 30 years as well as the active participation, under Iranian command, in the massacre of the Syrian people, in the destruction of their cities, villages and historical monuments, in the displacement of half of the population and in the exacerbation of sectarian tensions to unprecedented levels across the region.

‘Where in the world could this happen?’

In a 2009 interview with CNN, Asma al-Assad, the wife of Syrian President Bashar al-Assad, responded to a question about the brutal Israeli aggression against the Gaza Strip at the time, saying: “Three thousand and three hundred people injured. More than that, 22,000 people have been displaced from their homes … This is the 21st century. Where in the world could this happen?” Good question …

Beyond the hypocrisy in the rhetoric of the mumanaa, there is one thing that seems to escape its blissful supporters: the striking resemblance between their speech and that of the “Zionist enemy.”

Both of them claim to fight against “terrorists” who use civilians as human shields. Both present themselves as paragons of modernity, and both can claim unwavering support within the United Nations Security Council — one side relying on Washington and the other on Moscow.

What’s more, the two appear to outdo each other in demographic engineering, whether by blood or legal guile.

In Syria, law no. 10 adopted in April 2018 provides for the confiscation of large swaths of land in order to prevent the return of those exiled and reward those loyal to the regime, starting with the most affluent among them.

This is oddly reminiscent of the 1950 Israeli Absentees’ Property Law and the 1953 Israeli Land Acquisition Law, which permitted the confiscation of property belonging to Palestinians who were expelled from their homes.

The right of return has long been, and for good reason, equated with the national identity of Palestinians. While this right is seen as inalienable for Palestinians, many Syrians have now become entitled to claim it as well.

Why bring up this deceitful nature of the mumanaa today? Because in these times of distress many could fall into the trap of embracing what the mumanaa claims to fight against, as if it is forbidden to condemn with the same spirit the bloody hegemony of the Islamic republics and the Israeli colonial occupation. As if some have to die on their knees for others to live on their feet.

The Palestinian issue has never been the real motive for threats against the dissenting voices in Lebanon and elsewhere. What alone matters is the stance you take vis-à-vis this fallacious mumanaa.

The most recent proof of this is the assassination of Lokman Slim, who with his wife Monika Borgmann made a documentary on the September 1982 Sabra and Shatila massacre — one of the few works aimed at breaking collective amnesia on the subject.

Similarly, almost 16 years ago on June 2, 2005, Samir Kassir was assassinated in Beirut. He was a historian, journalist and defender of three causes, who succeeded like no one else in showcasing their inter-relation: the sovereignty of Lebanon, the independence of Palestine and democracy in Syria.

His name was Lokman Slim. He was 58 and the victim of a cowardly assassination on the night of Feb. 3–4 in a crime that is widely blamed on Hezbollah in South Lebanon.His name was Lokman Slim. He was an erudite and courageous Lebanese intellectual, and his freedom of speech bothered all those who, for decades, had indulged in a rhetorical masquerade called mumanaa.His freedom of speech...