For the first time in its history, Lebanon’s national currency broke the LL12,000 mark against the US dollar on Saturday, before retreating 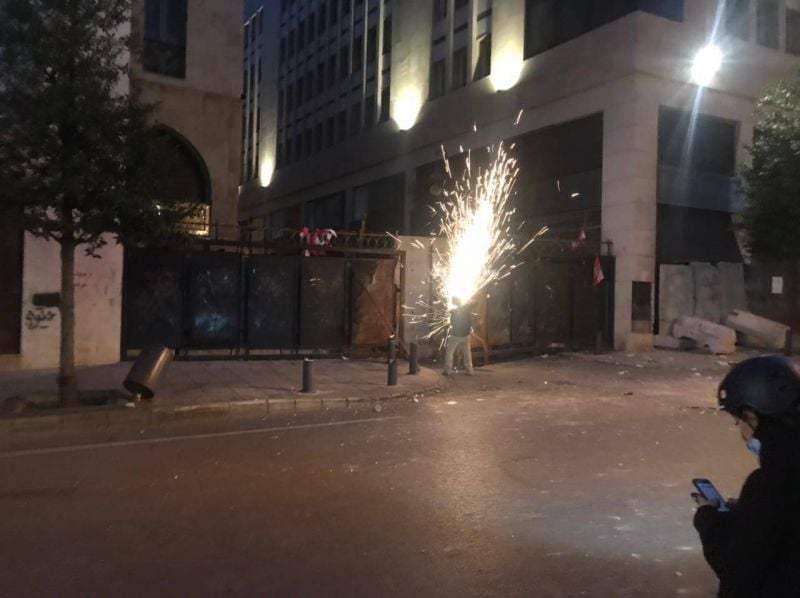 A worker attempts to seal a gate to Nijmeh Square, the site of Parliament, on Saturday. Protesters later stopped the work. (Credit: Omar Tamo/L’Orient Today)

BEIRUT — Hundreds of protesters took to the streets across Lebanon as the national currency hit a record low Saturday, trading at more than LL12,000 to the US dollar on the parallel market before retreating.

Scores gathered in downtown Beirut, with some setting up tents in Martyrs’ Square, what was once the epicenter of the Oct. 17, 2019, nationwide uprising.

Security forces fired tear gas to disperse crowds surrounding Nijmeh Square, the site of Parliament. Protesters had been throwing rocks over the barriers surrounding the square and some had managed to break one gate open, but did not breach the square.

“We want to burn you down the way you burned us; we want to rob you the way you robbed us. … You should fear your citizens,” a protester said from Martyrs’ Square, directing his comments to Lebanese politicians in a televised interview with Al Jadeed.

Meanwhile, protesters blocked roads across the country denouncing deteriorating living conditions, including at Beirut’s Cola roundabout, Tripoli’s Abu Ali roundabout, the Naameh highway, the Jiyyeh highway and the Taalabaya road. Protesters also marched in the streets of Sur, demanding the overhaul of the entire political class.

The national currency has now lost about 86 percent of its value since it began to significantly diverge from the official peg of LL1,507.5 per dollar during the second half of 2019. The LL675,000 minimum wage in Lebanon — $450 at the official exchange rate — is now worth $56.25.

It is the second Saturday in a row to see such a slide. The exchange rate hit LL10,800 last Saturday before recovering slightly. On Monday, President Michel Aoun convened an urgent meeting in Baabda to address the issue, after which authorities announced a crackdown on licensed and illegal money changers who “speculate” against the lira, as well as a block on electronic platforms that provide the market dollar price.

Despite the measures, the lira hit LL10,800 again Monday before falling further during the week, reaching LL11,300 on Friday evening.

Exchangers contacted by L’Orient Today on Saturday were dealing under the counter and providing money exchange services via delivery. Some were only buying dollars from customers without selling, while others were transacting at exorbitant spreads — the difference between the rate at which they buy and sell — making excessive profits.

Lirarate.com, one of the major platforms providing the dollar price, stopped showing the market price “due to rapid deterioration” of the national currency. It is now only showing the lira’s official margin of LL1,500 to LL1,515 to the dollar. However, this website can only be accessed via a virtual private network, or VPN.

“The president’s stance is known,” a Baabda palace spokesperson told L’Orient Today when asked for comment on the lira’s collapse and subsequent protests. “[Aoun] is against violence … but is not against the right [of people] to protest and express their opinion.”

On Monday, Aoun condemned protesters’ roadblocks, calling them an “attack on citizens’ right to travel” and asking security forces to “implement the laws without hesitation.”

Lebanon has been without a functioning government since the last one resigned in the aftermath of the catastrophic Beirut Port explosion in August. Political bickering over the formation of a new government has dragged on even as the country’s economy continues to plummet. Aoun and Prime Minister-designate Saad Hariri have been at loggerheads since Parliament designated the former premier to form a new government in October. Both men must agree on the composition of the next cabinet.

While protests over the last two weeks have spread out across the country, numbers remain relatively small and demonstrations are quick to be diffused.

Many residents feel as though hope is lost.

“I don’t have hope in Lebanon as long as we are not united,” Khaled, 35, told L’Orient Today from Martyrs’ Square Saturday. “Hunger is the only thing that unites.”

Nayla, a university student, said, “I don’t have hope in Lebanon, but I prefer trying over staying at home.”

BEIRUT — Hundreds of protesters took to the streets across Lebanon as the national currency hit a record low Saturday, trading at more than LL12,000 to the US dollar on the parallel market before retreating.Scores gathered in downtown Beirut, with some setting up tents in Martyrs’ Square, what was once the epicenter of the Oct. 17, 2019, nationwide uprising.Security forces fired tear gas to...