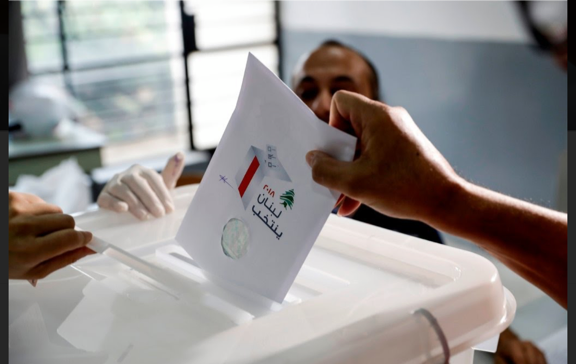 If one’s name is not correctly included on the register by the specified deadline, currently March 1, one loses the eligibility to vote. (Credit: Joseph Eid/AFP)

BEIRUT — While 2022’s scheduled parliamentary elections are still more than a year away, next week marks a deadline for Lebanese residents and overseas citizens planning to vote.

March 1 is the deadline for eligible voters to make sure their names are listed on the voter roll and to verify the information published there is correct to ensure they will be able to vote.

If their name is missing from or written incorrectly on the voter roll, citizens must refer to the mokhtar of their hometown, who will guide them through the process of registering their name.

If one’s name is not correctly included on the register by the specified deadline, they lose eligibility to vote. This rule applies to Lebanese both in and outside the country.

Lebanese law permits all citizens over the age of 21 to vote whether they are resident in Lebanon or overseas, except those individuals disqualified from voting under Article 4 of the 2017 electoral law.

In the last parliamentary elections, held in May 2018, only 49.7 percent of eligible voters cast their ballots, despite the fact that the election was long-awaited, having been originally scheduled for 2013 and then postponed multiple times. In fact, voter turnout in 2018 was down from 53.4% in the previous parliamentary elections, which were held in 2009.

In 2018, the United Nations Development Program’s Lebanese Elections Assistance Project reported 82,965 registered voters abroad, with 46,799 of them actually voting in that year’s polls. However, the number of potential overseas voters is far higher. According to a policy brief published by the Robert Schuman Center for Advanced Studies, as of 2014 there were 885,000 first-generation Lebanese immigrants living abroad.

In an attempt to avoid a repeat of 2018’s weak turnout, some civil society activists have begun a push to boost turnout in 2022 — assuming the elections take place on schedule this time.

Sawti is an initiative by Impact Lebanon, an NGO assembled by a group of politically independent Lebanese in the diaspora, that aims to bring politics back to the people by providing information on the logistics of voting, promoting civic engagement, educating voters on alternative candidates and creating a space for voting advocacy.

“A lot of people over the past 30 years have disengaged from politics, especially in the diaspora and they feel like there is nothing they can do. They are either hopeless or don’t understand the process of voting because they’ve become so indifferent to politics,” said Diana Abbas, a co-founder of Impact Lebanon and a member of the Sawti team.

“The objective is to get people engaged in the political process so that they become active citizens. The most simple way to get them engaged is through casting a vote,” she explained.

The initiative is focusing on the diaspora but also targets people residing in Lebanon. For now, the focus is on making sure eligible voters are registered before the March 1 deadline.

There are other procedures that voters should be reminded of, Abbas added. Local citizens are required to check in-person that their names are correctly registered in their hometown, rather than in the city or town in which they reside, even if it is inconvenient.

“During the last elections, I missed the registration deadline, because it coincided with my university midterms week. I was discouraged to drive all the way to Tripoli from Beirut,” said Ahmad Kabbara, a Lebanese citizen residing in Beirut. “For this time I will make sure to register this week,” he added.

Lebanese diaspora, on the other hand, have to register in the city that they expect to be in during the elections period, because once registered there they can’t vote anywhere else, Abbas told L’Orient Today. Moreover, a minimum of 200 people must register to vote in any given city in order for a voting center to be opened in that city’s Lebanese embassy, which necessitates rallying people to vote.

Lebanese abroad must hold a valid Lebanese passport or ID in order to be eligible to vote. If they were born abroad and do not have one, but would like to vote, they must apply for one or other of these official documents. To help facilitate Lebanese overseas seeking these documents, “we partnered with a few volunteering lawyers in Lebanon to provide legal support,” Abbas said.

“If they couldn’t attain their citizenship before March’s deadline it is not the end of the world,” she added, explaining that for the 2018 elections Lebanese people in the diaspora were given a second deadline, around November, to complete their registration.

Moreover, while the registration website is in Arabic, some people in the diaspora do not know how to read the language, so Sawti also provides translation services.

“People have been engaging with us, sharing our posts and acknowledging that there is a need for a voting support community like this one,” she said. “Between the people who approached us, many said that they did not know they could vote from abroad and others said they knew but were unfamiliar with the procedure.”

Those who were planning not to vote because they thought their vote didn’t matter “learned otherwise through this initiative. And others asking about independent candidates who can work as an alternative, will soon learn about them through Sawti,” Abbas said.

Tamirace Fakhoury, an associate professor of political science and international affairs at the Lebanese American University and the director of the Institute for Social Justice and Conflict Resolution, said that the people who have taken to the streets since October 2019 to protest Lebanon’s sectarian and corrupt political leadership might perceive the upcoming elections as a game changer. Fakhoury anticipates that this perception has the power to drive an increase in turnout for the 2022 polls.

Sarah Haddad, a Lebanese citizen living in Paris, is among those who intend to vote next year, having not done so in 2018.

“I have a change of heart this upcoming elections, the October ’19 revolution gave me hope. During the revolution I couldn’t but want to be involved at the sight of people gathering and chanting against the corrupt system,” Haddad said. “Given that I couldn’t join my people on the streets, I will join them by casting my vote during the elections.”

Through casting their vote, the millions of Lebanese nationals living in the diaspora might be able to change the system through giving legitimacy to new electoral alliances or to new emerging civic alliances that are not co-opted by the sectarian system, Fakhoury told L'Orient Today.

This depends on how prepared the landscape is going to be in Lebanon, “because so far we don’t see new alliances arising,” she added.

Fakhoury explained to L’Orient Today that the low turnout in votes cast by the Lebanese diaspora in 2018 was due to many reasons. The process for the first ever out-of-country voting “was rushed and few believed it would be implemented,” she said, adding that many expats, like Lebanese living in the country, are skeptical of the political process.

Also, there was a “contentious political debate happening over who is eligible to vote” in the Lebanese diaspora. In many cases, people were not informed of their right to vote, so there was “an element of confusion,” she added.

Paris-based Haddad, however, had simply never thought her overseas vote could carry any weight.

“I was never interested in casting a vote before,” Haddad said. “I used to think to myself, if my vote in Lebanon never made a difference, what can it do outside Lebanon?”

Other expatriates just did not know that voting in Lebanon’s elections was an option.

“I never voted from outside Lebanon, no one told me I could,” said Karim Jamal, a Lebanese citizen in Canada. “There should be awareness campaigns because had I known, I would have definitely cast my vote.”

As for local citizens, many don’t bother voting because they don’t trust that the system can effect change.

“My family and I don’t vote, it simply doesn’t make any difference,” said Elham Dib, a Lebanese resident.

Those who do want to vote, meanwhile, may be blocked by missed deadlines or other logistical issues.

“Elections should be preceded by clear explanations on procedures, deadline reminders and an awareness campaign on the importance of political participation,” Fakhoury said.

According to Fakhoury, political leaders are as keen on survival as ever. But increased turnout among youth, particularly in the diaspora, could bring hope for change, she said, while the widespread economic pain, which resulted from the collapse of the lira and rendered most residents’ bank deposits largely inaccessible, might make people more willing to reject the usual political players.

“There are the people who have frozen bank accounts, wouldn’t they draw on this occasion to try change the landscape too?” Fakhoury asked.

Want to vote, but need assistance? Visit the Directorate-General of Civil Status or Sawti to learn more about the first deadline on March 1, 2021.

BEIRUT — While 2022’s scheduled parliamentary elections are still more than a year away, next week marks a deadline for Lebanese residents and overseas citizens planning to vote.March 1 is the deadline for eligible voters to make sure their names are listed on the voter roll and to verify the information published there is correct to ensure they will be able to vote. If their name is missing...