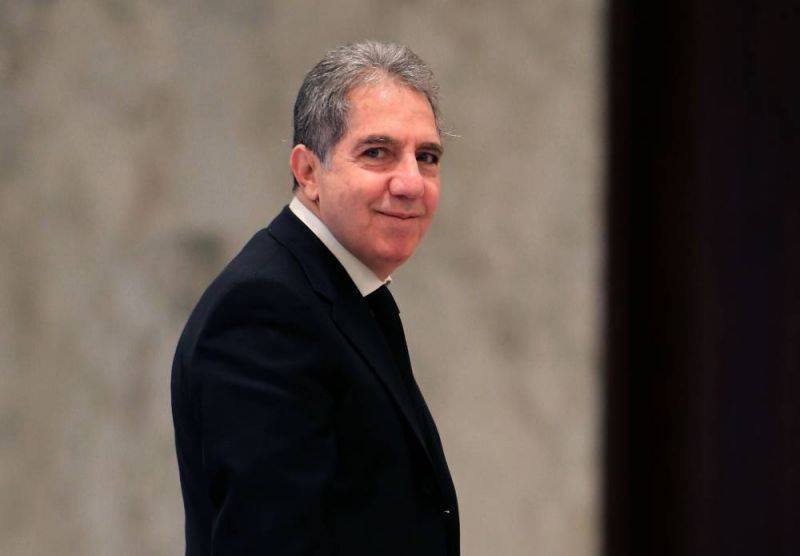 BEIRUT — The road map for dealing with Lebanon’s spiraling financial crisis and the collapse of its national currency begins with the state budget, yet caretaker Finance Minister Ghazi Wazni has presented few, if any, viable options to set Lebanon on the right fiscal trajectory, experts said.

Nearly five months after the legal deadline, Wazni submitted the 2021 budget draft to the cabinet on Jan. 26. L’Orient Today was able to secure a copy of the proposal, which contains 111 articles, as well as a detailed breakdown of spending spread over more than 1,100 pages.

The proposed budget forecasts total expenses at LL19.76 trillion, while taxes and non-tax revenues stand at only LL13.57 trillion, meaning that Lebanon will once again register a fiscal deficit, as it has every year since 1975. The current proposal estimates that in 2021, the fiscal deficit will reach LL6.19 trillion, a slight decrease from the projected deficit of LL6.33 trillion last year.

At the same time, the plan would further delay some long-awaited infrastructure projects and provide limited social support to an increasingly impoverished population.

Wazni claimed on Feb. 4 that his proposal is a “social budget that includes reforms,” but analysts told L’Orient Today that the document does not back up this claim.

The cash-strapped state is in need of international donors’ support, but that support is conditional on the implementation of an International Monetary Fund-supervised reform program and rescue package.

To unlock the IMF rescue package, the government is required to reform its budget through a combination of corrective revenue and spending measures, which are largely not addressed in the current proposal.

Jean Tawile, an economist and an adviser under former economy minister Alain Hakim, said that “the draft does not present a comprehensive plan to manage the financial and social crises Lebanon is witnessing.”

The budget does not set Lebanon on a sustainable path, he added.

Tawile’s position was seconded by Kamal Hamdan, an economist and the director of the Consultation and Research Institute, a Beirut-based consultancy.

“The budget is supposed to yield solutions to the current financial crisis, which are nonexistent in the proposal,” Hamdan said. “No macroeconomic reforms were even included.”

For instance, despite warnings that the central bank’s foreign currency reserves have dropped to a critical threshold, leaving it likely unable to maintain subsidies on essential imports for much longer, the budget ignores the effect of lifting or retargeting subsidies on the state’s estimated expenditures.

The removal of subsidies would substantially increase the government’s expenditures on fuel and other imported goods, given that the government would have to exchange lira for dollars at a higher rate, but Wazni’s proposal values its revenues and expenses based on the official peg of LL1507.5 to the dollar.

Wazni did not respond to a request for comment on the criticisms raised regarding the budget.

The proposed budget slightly reduces projected spending on consumable items such as stationery, clothes, fairs, festivals and birthdays. It estimates these purchases will cost the treasury about LL34 billion in 2021 — LL4 billion less than the previous year.

Meanwhile, LL13 billion is designated to cover salaries for the Railway Administration, despite the railroads having been abandoned since the early 1990s. The amount represents aLL3.2 billion reduction from the previous year’s budget.

In total wages, salaries, retirement, end-of-service indemnities and related items represent about half of the state’s expenses at LL10.44 trillion.

Salaries for public servants remain unchanged in the proposed budget compared to last year. However, the purchasing power of public servants has eroded, with the lira losing more than 80 percent of its value since it unmoored from official rate in 2019. As of Wednesday, it was trading as high as LL9,100 to the US dollar on the parallel market.

The UN agency ESCWA estimates around 55 percent of the population lives under the poverty line, while Wazni only allocated LL150 billion — 0.8 percent of the budget — to support the country’s most vulnerable families.

Although the electricity sector continues to fail to provide the country with consistent and reliable power, the Finance Ministry will continue to cover Électricité du Liban’s budget gap, as it has in previous years, providing LL1.5 trillion to cover the expenses not covered by the state utility’s customers, an amount equal to 11 percent of the state’s revenues. The budget document does promise to make steps toward tariff reform to improve EDL’s revenues, but gives no details.

“It’s painful to see that the budget is lacking national efforts on public investments,” Hamdan said.

While the country’s education sector has been brought to its knees due to the deterioration of the lira, Wazni chose to postpone the improvement of the Lebanese University and the construction, equipment and maintenance of school buildings for the Education Ministry, which would have respectively cost LL22 billion and LL6.3 billion if carried out in 2021.

Also with the aim of cutting expenditures, projects to develop, improve and extend the networks operated by Ogero, Lebanon’s state run telecoms infrastructure firm, were deferred to 2022.

In addition, road improvements, such as on the northern coastal highway running between the Tripoli area and the Syrian border, and water and electrical infrastructure improvements in various regions were postponed. These projects have been delayed since 2019.

“Projects are being postponed for years. The Finance Ministry should assess these projects and prioritize those that provide social benefits, such as education,” Tawile said.

Meanwhile, interest expenses on the state’s hard currency debt fell from $2.4 billion in 2020 to $80 million after the country’s default on eurobond payments in March 2020, a first in its history.

What are Lebanon’s revenues?

Estimated at LL2.4 trillion for 2021, value added tax is the main source of income for the government. It is followed by tax on interest, which is projected at LL1.9 trillion, and transfers from the state’s telecommunications monopoly, forecast at LL1.46 trillion.

It’s a call for “owners of large amounts of capital to share the burden that the state is entitled to give to those with limited income,” the proposal says. If implemented, this tax will provide the treasury with LL1.1 trillion, Wazni said on Feb. 4.

In addition, the treasury aims to collect LL922 million from property taxes.

To address housing demand and affordability, the Finance Ministry is seeking to implement a vacancy tax on empty housing units, a measure that advocates for affordable housing have long called for to incentivize landlords to rent out their properties.

However, vacant lands remain untaxed. These properties should also be taxed to spur investments and boost economic growth, Daher said.

Aiming to attract fresh dollars into the country, the budget proposal would offer residency to “Arabs and foreigners who acquire a house worth $350,000 in Beirut or $200,000 outside the capital, if the payment is transferred from a foreign bank to a bank in Lebanon.”

However, Syrian and Palestinian refugees would be excluded, ostensibly to preserve their right of return to their respective homelands.Wazni’s proposal also seeks to support productive sectors through tax exemptions and incentives granted to manufacturers, exporters and investors.

As per Article 23, exporting industries would receive a 50 percent tax exemption on their net income if they transfer their hard currency revenues to local banks in order to invest in Lebanon.

Touristic and industrial companies would also be exempt if more than 80 percent of their employees are Lebanese.

Startups, meanwhile, would be exempted from paying taxes for three years under the condition of ensuring at least 80 percent of their workforce is Lebanese.

In one of the more unusual revenue-generating proposals, the annual budget outlines a new fee for passports with special numbers. A “first class” passport renewal for tenyears would cost LL1.2 million, while a “second class” passport would cost LL950,000 instead of the regular fee of LL500,000. The classification would be set by the head of General Security.

Despite all these revenue-generating proposals, Tawile said he believes that the estimated LL13.57 trillion in state revenues is out of touch with reality.

In fact, government revenues failed to reach their projected figures in both 2018 and 2019 — a mismatch worth about LL3.38 trillion over the two years. Figures for 2020 have not been released.

How is Lebanon spending without a budget?

The procedure of transfering the budget to the cabinet, which took place in late January, was supposed to occur by Sept. 1, 2020, according to law.

The cabinet was then supposed to transfer the proposal to Parliament which would have assigned it to its Finance and Budget Committee — chaired by MP Ibrahim Kanaan — for approval, at the beginning of Parliament’s October 2020 session.

Once the committee had discussed and amended it, the proposal would go to the floor of Parliament for a vote.

The budget law was supposed to be voted before the end of 2020, but the constitution provides an additional one-month extension for emergency cases. This deadline was crossed on Feb. 1.

The state is currently resorting to an extra constitutional mechanism to finance its expenditures, using the “one-twelfth rule.” This rule sets government expenses and income collection for a month based on one-twelfth of the previous year’s budget.

It enables the government to spend while waiting for a new budget to be approved without delaying the payment of public sector salaries and other expenditures.

However, this rule was misused for more than a decade when policymakers failed to pass any budget. They adopted it for some 12 years — rather than the single month allowed under the constitution — between 2005 and 2017, when successive governments and parliaments failed to pass an annual budget due to political conflicts.

The annual budget proposal is currently being assessed and will potentially be modified by the cabinet — although, in theory, since the current ministers are serving in caretaker status, the next government could scrap the budget and create a new one.

Meanwhile, at the end of January, the credit rating agency Moody’s assigned Lebanon a “Ca” grade for its fiscal policy strength and effectiveness — one of the lowest tranches on the rating scale.

The rating was yet another sign that in the absence of key steps toward plausible economic and fiscal policy reforms, international support to Lebanon is likely to remain elusive.

Correction: The previous version of this article said that the cost of improvement of the Lebanese University would have been LL20 billion if they were carried out in 2021. The correct figure is LL22 billion. L’Orient Today regrets the error.

BEIRUT — The road map for dealing with Lebanon’s spiraling financial crisis and the collapse of its national currency begins with the state budget, yet caretaker Finance Minister Ghazi Wazni has presented few, if any, viable options to set Lebanon on the right fiscal trajectory, experts said.Nearly five months after the legal deadline, Wazni submitted the 2021 budget draft to the cabinet on...