The Beirut port blast probe is underway again. Here’s where it stands and what lies ahead 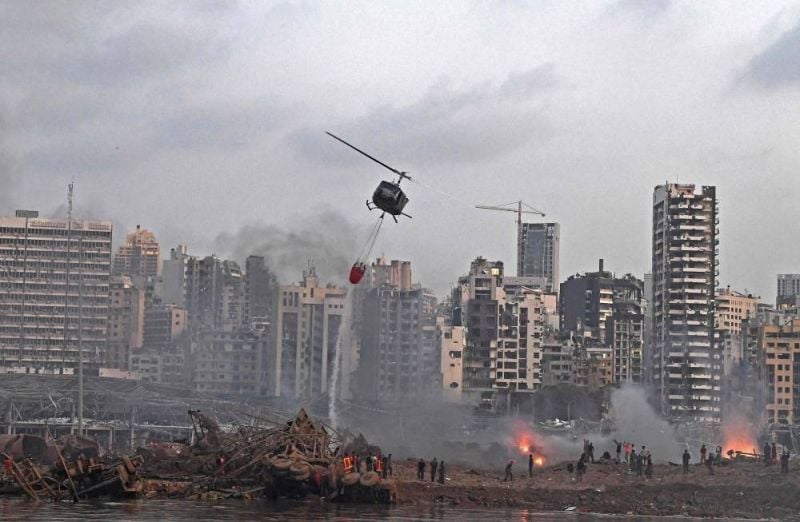 A helicopter works to put out multiple fires at the scene of the massive explosion at Beirut's port on Aug. 4. (Credit: AFP)

BEIRUT — It has been more than six months since the launch of what was promised would be a quick investigation into the Aug. 4 Beirut port explosion. What has instead transpired is a slow, opaque process led by Judge Fadi Sawwan that saw dozens charged, including caretaker Prime Minister Hassan Diab and two former ministers, before the case stalled completely for 55 days.

Now that Sawwan has resumed interrogations, here’s where the case stands and how we can expect it to develop in the coming days and weeks.

Sawwan marked the resumption of the probe by summoning several officials for questioning, including a former army commander. Gen. Jean Kahwagi appeared before Sawwan as a witness on Thursday. Kahwagi is the most senior security official and first army official to testify so far.

On Feb. 11, Kahwagi, who was army chief until 2017, said he told Sawwan he had recommended that the ammonium nitrate stored at the port be sold privately or returned to importers long before the explosion. He said he testified that the military said it had no use for the explosive chemical, “due to its very large quantity, its limited use, and the fact that it decomposes over time, which poses a risk when stored for a long time.”

Some 2,750 tons of ammonium nitrate carelessly stored in a warehouse at the Beirut port since 2014 led to one of the largest non-nuclear blasts ever recorded, killing over 200 people and wounding thousands. The cause of the fire which ignited the explosive chemical remains unknown to the public, despite months of investigation.

Sawwan is expected to continue investigations this week. The prosecutor has summoned for questioning the acting director-general of the port, Bassem al-Qaissi, and Mustafa Baghdadi, the shipping agent for the MV Rhosus, the ship that transported the ammonium nitrate to Beirut in 2013, a judicial source told L’Orient Today.

Qaissi replaced Hassan Koraytem, who was arrested in August for his role in the explosion.

Former Public Works Minister Youssef Fenianos, who was charged with criminal negligence in November, is also expected to appear before Sawwan as a suspect on Thursday, the source said. Moussa Hazimeh, the former customs chief in Beirut, has also been summoned to appear Thursday.

Sawwan faced legal challenges to his authority and suspended the probe on Dec. 17, when two former ministers — Ali Hassan Khalil and Ghazi Zeaiter — who he had charged with criminal negligence, requested that the Court of Cassation transfer the case to another judge.

Hassan Diab, who had been in office as the country’s prime minister for less than seven months at the time of the explosion, was also indicted in the probe along with Fenianos in December. Diab, the highest-ranking figure to be charged, refused to appear before Sawwan for questioning in December.

Khalil and Zeaiter challenged Sawwan’s summons and asked the court to replace the judge, citing “legitimate suspicion” over the legality of the decision.

The Court of Cassation, headed by Judge Jamal al-Hajjar, in January decided to reject the request to pause the investigation and gave Sawwan the green light to resume questioning officials and civil servants over the Aug. 4 explosion.

The court, the highest in the country, has not yet issued a decision on the two former ministers’ request to transfer the file to another judge.

Diab and the three former ministers have yet to appear for questioning following the charges despite being summoned on several occasions.

It remains unclear why Sawwan decided to indict these four men while three other individuals, including current Prime Minister-designate Saad Hariri, had held the premiership since the ammonium nitrate first arrived in Beirut in 2013.

With the resumption of the investigation, Sawwan will be able to summon the ministers and Diab once again. Whether he does so remains to be seen.

“If he really wants to take firm action he can escalate by summoning them again for investigation. … If he takes that step then I think we’re going in the right direction,” Wissam Lahham, a constitutional law professor at St. Joseph University, told L’Orient Today.

However, Lahham said the main challenge moving forward is for political leaders to take the rule of law seriously. “Until now, they have considered themselves above the law with impunity,” Lahham said.

The domestic investigation has been widely condemned by lawyers, victims and human rights organizations for its lack of transparency and delays allegedly due to political interference.

Sawwan has so far detained 25 people in relation to the blast, but they are mostly mid- to low-level customs, port and security officials. The details of each detainee’s charges remain unknown.

“We still don’t have any answers. It’s not enough,” Lahham said, criticizing the lack of information that has been provided to the public over the last six months.

A judge who asked to remain anonymous told L’Orient Le Jour in January that the stalling of the former ministers’ request to transfer the case to another judge suggests the Court of Cassation has confidence in Sawwan’s capacity to continue the investigation.

Still, Lahham said it is hard to predict what the outcome of investigation will be.

“We are in uncharted waters because it’s the first time we have had a judge that has accused ministers and an acting prime minister. … It’s like playing a game of dice.”

BEIRUT — It has been more than six months since the launch of what was promised would be a quick investigation into the Aug. 4 Beirut port explosion. What has instead transpired is a slow, opaque process led by Judge Fadi Sawwan that saw dozens charged, including caretaker Prime Minister Hassan Diab and two former ministers, before the case stalled completely for 55 days.Now that Sawwan has...