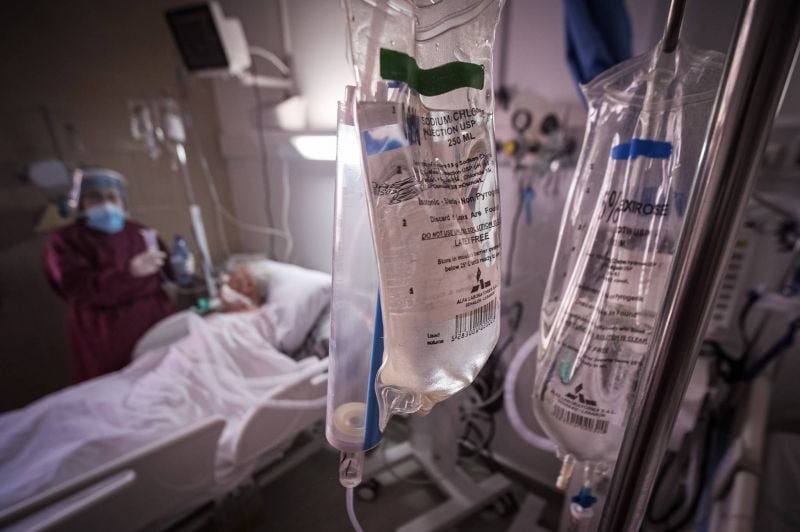 Better home-care support for those with mild and moderate cases of COVID-19 would reduce the strain on hospitals. (Credit: João Sousa/L’Orient Today)

BEIRUT — With hospitals’ coronavirus wards having been at or near capacity for weeks now, the COVID-19 ministerial committee is studying a plan that would treat patients moderately affected by the virus through a professional home-care service, alleviating some of the pressure on medical facilities.

As the plan was being mulled Tuesday, the Health Ministry announced that a further 81 people — a new daily record — have died from complications of the disease in the past 24 hours, bringing the death toll to 3,226 since the virus was first detected in the country almost a year ago. Meanwhile, the occupancy rate for coronavirus ICU beds in Beirut has reached 100 percent, according to the latest figures from the World Health Organization. The countrywide ICU occupancy rate is 92.2 percent.

“The medical staff is exhausted and hospitals have reached their capacity limit, thus there is no other option but to adopt this plan,” Charaf Abou Charaf, the head of the Order of Physicians, one of the groups involved in drafting the plan, told L’Orient Today.

“Previously, the number of cases and patients in hospitals was not alarming enough to take this plan into effect, but today the situation is much more difficult,” he added.

The plan — drafted by the orders of physicians and nurses, Lebanese Red Cross and Private Hospitals Syndicate, and seen by L’Orient Today — aims to treat coronavirus patients so that they don’t develop severe symptoms that necessitate hospitalization. For those patients who are hospitalized, it aims to expedite their discharge while making sure they receive the proper treatment and follow-up in the comfort of their homes.

Under the plan, Lebanon would be divided into geographical areas, with each area assigned a medical team composed of one doctor and two nurses who will supervise and monitor COVID-19 patients, Abou Charaf explained.

According to the plan, cities will be divided into residential blocks with a population limit of 10,000 people, while smaller municipalities will distribute health care services through their crisis cells, including to outlying villages.

The plan’s medical teams would work in full coordination with municipalities, each of which would assemble a team of volunteers for a crisis and disaster management cell.

After a case is reported, the municipality would inform a doctor who would then assign a nurse to check up on the patients, explained Myrna Doumit, the head of the Order of Nurses. “If the patient’s case worsens, the doctor communicates with the Red Cross to transport them to any available hospital that determines their need for hospitalization.”

Upon discharge from the hospital, each patient would have to communicate with the crisis and disaster management cell in their area. The cell would then coordinate with the area-specific physicians again to follow up on the patient’s health condition until full recovery.

“This plan has been simulated in a number of municipalities and it proved efficient,” said Doumit, adding that the point of the plan is to set standards for care so that municipalities can operate professionally.

The plan also aims to tackle unemployment, according to Doumit, who explained that it was submitted with an attached list of “200 doctors and 450 nurses [who] are ready to start working.” She added that the nurses suggested are not presently employed in hospitals.

“The reason behind choosing these nurses is to combat unemployment and create job opportunities for our health care workers so that they don’t leave us to work abroad,” she said.

The plan entails securing the necessary medications, monitoring devices and equipment to measure blood oxygen, temperature and heart rate, along with oxygen devices, through municipalities.

In terms of how the plan’s implementation would be financed, Abou Charaf said, “We have gathered some funds through private and international organizations for securing the medical equipment and supplies. … The interior minister promised to buy more equipment from his ministry’s budget, in hopes that the Health Ministry would contribute with funds too.”

Mohamad Haidar, an advisor to the health minister, told L’Orient Today on Tuesday that a decision on the plan “will be announced after tomorrow’s meeting.” The advisor added that “a decision will be made this Thursday” on whether to extend the countrywide total lockdown that has been in place since Jan. 14.

However, in some areas, home care is already being pursued as a strategy to alleviate overwhelmed hospitals. Last week, the municipality of Jbeil launched an initiative to provide COVID-19 patients with oxygen devices, medications and consultations with doctors.

This came after two hospitals in the area announced that they had reached full capacity.

Indeed, hospital workers, who have been on the front lines of the pandemic for almost a year now, seem likely to welcome the plan with open arms.

“There are moderate to mild cases coming into the hospital demanding to be treated on site, even when they are not in need [of such treatment]. The home-care plan relieves us from unnecessary overcrowding and reassures patients that they can stay at home and still receive professional care,” said Hussein Kataya, the head of nursing at Rafik Hariri University Hospital.

Meanwhile, Ghinwa Dakdouki of Labib Medical Center in Saida explained that sometimes people who have mild to moderate cases of the virus wind up in hospitals because they do not follow the appropriate course of treatment at home.

“COVID-19 patients tend to take medications haphazardly and without prescriptions, thus making their cases worse,” she said, adding that “this emphasizes the need for professional help at homes for patients who don’t need hospitalization.”

BEIRUT — With hospitals’ coronavirus wards having been at or near capacity for weeks now, the COVID-19 ministerial committee is studying a plan that would treat patients moderately affected by the virus through a professional home-care service, alleviating some of the pressure on medical facilities.As the plan was being mulled Tuesday, the Health Ministry announced that a further 81 people...