What’s behind the case against Jean Kahwagi, and how a judicial maze and banking secrecy may derail the probe 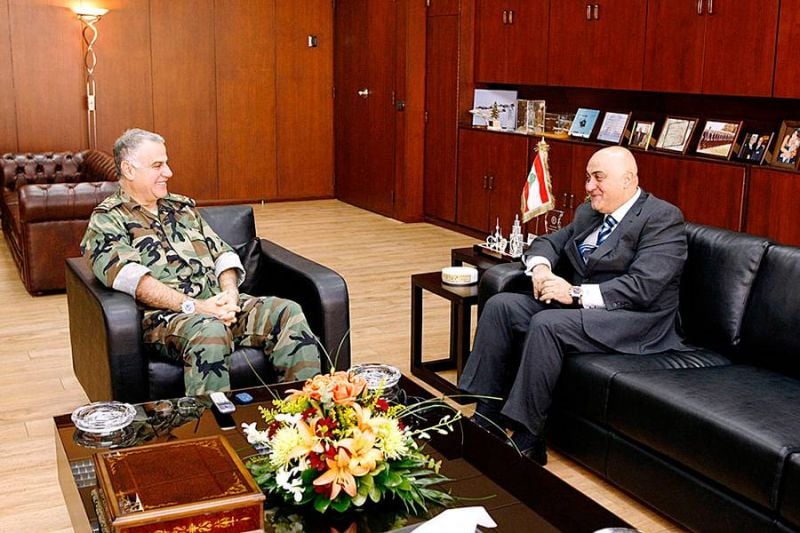 Kahwagi meets with an official from Finance Bank in 2016. (Credit: Lebanese Army)

BEIRUT — Behind the headlines of the blockbuster illegal enrichment charges against Lebanon’s former army chief and seven other former security officers lies an opaque investigation that has failed so far to access the defendants’ bank account information.

The circumstances of the case and how it has shuffled through the labyrinth of Lebanon’s widely criticized judiciary remains a point of contention, while banking secrecy has thrown a spanner into the investigation.

Defense attorneys in the case offered differing explanations on how the judicial action was initiated. However, they were in agreement that the case was sparked by a TV appearance of lawyer Wadih al-Akl — a member of the Free Patriotic Movement’s political bureau — in which he revealed a bank document raising questions about former Lebanese Army chief Jean Kahwagi’s wealth.

Initially investigated by the Military Tribunal, the case is now in the hands of the lead investigative judge in Beirut, Charbel Bou Samra, who is presently adjudicating procedural motions filed by attorneys of the retired officers.

The COVID-19 lockdown in Lebanon, which began on Jan. 7, has for now paused hearings in the case, as the defendants face the possibility of questioning by the investigative judge.

Charges against Kahwagi, six of his former high-ranking army colleagues and a retired General Security officer now on the run first became public on Dec. 2, a little over two months after the judiciary swung into action on the alleged corruption.

With proceedings still in an investigative phase that precedes a formal accusatory decision to initiate a trial, the state’s evidence remains sealed. Unconfirmed reports allege the eight former officers and their families own a collective 325 real estate properties acquired with wealth illicitly earned through their use of public office. The former officers deny the charges.

In this first case under a new illegal enrichment law — which includes measures to facilitate efforts against public graft — the prosecution of the accused ex-officers faces a potentially long road ahead, one that winds through a judiciary widely perceived to lack independence.

Lawyers involved in the case said that the judicial action was sparked mainly by Akl’s public evidence against Kahwagi, as well as by allegations lobbed by an ex-minister against Kahwagi and two other officers.

Akl, a practicing attorney who pursues anti-corruption issues, sat down for an interview with OTV, the mouthpiece of the FPM, on Sept. 24 and unveiled a document from Finance Bank raising questions about Kahwagi’s wealth.

The document — purportedly minutes of the bank’s board meeting on Oct. 2, 2015 — shows that the directors approved an exemption for Kahwagi, his wife and their three children to conduct banking operations worth up to $1.2 million each without needing a cash transfer slip.

Kahwagi’s base salary as army commander was equivalent to approximately $3,000 a month at the official exchange rate, according to the pay scale in place during his tenure. 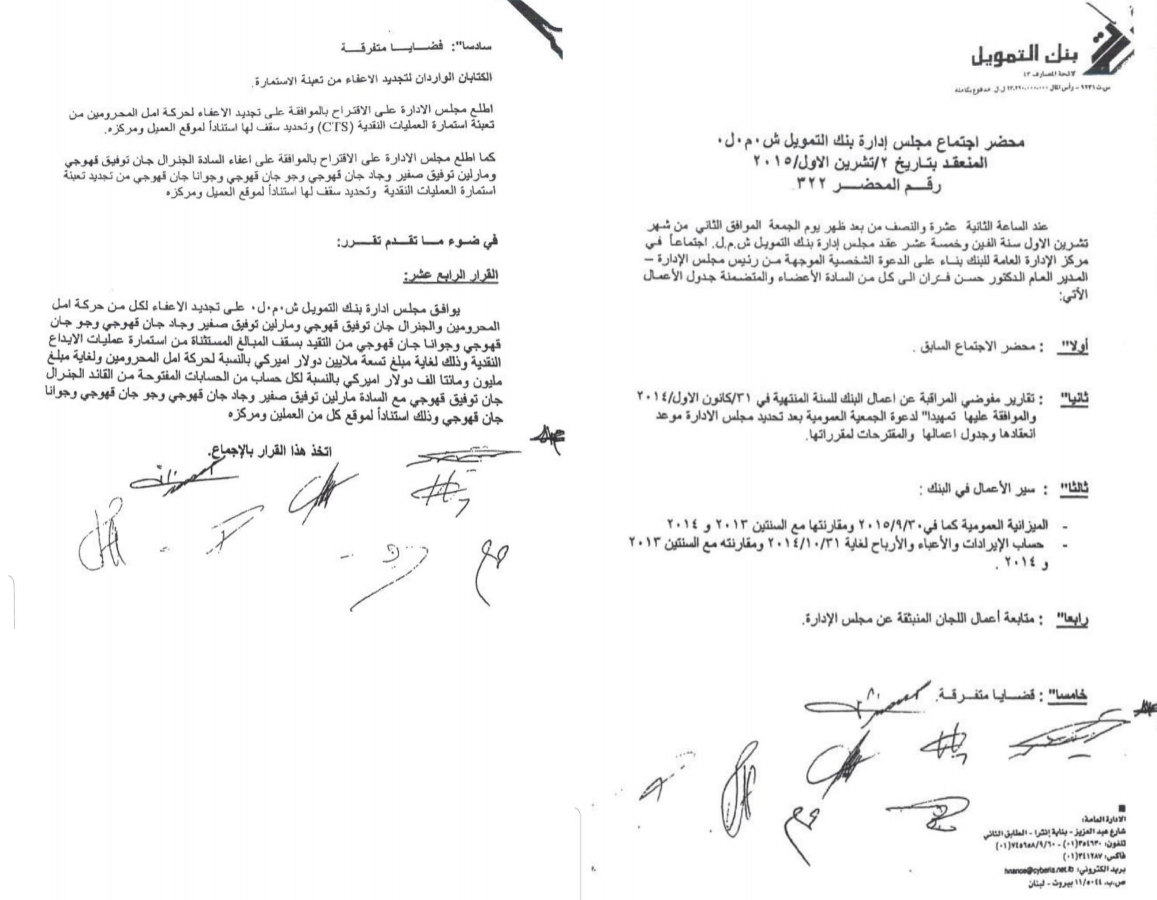 Purported minutes from Finance Bank’s board meeting on Oct. 2, 2015, provided by Akl, in which board members signed off on exemptions for Kahwagi and his family — as well as Parliament Speaker Nabih Berri’s Amal Movement — to conduct operations in the millions of dollars with less oversight.

Kahwagi and his family’s exemption at Finance Bank was previously brought up in public by Al-Akhbar newspaper editor-in-chief Ibrahim al-Amin in a column written in September 2016. “Nobody took [this article] and launched an investigation,” Akl said, in reference to the judiciary at the time.

Akl was not alone in leveling accusations against Kahwagi during TV appearances. During a Sept. 4 interview with Al-Jadeed, former minister Wiam Wahhab accused Kahwagi of amassing $40 million in his bank account. The controversial politician added, without offering any proof, that Kahwagi’s former office manager in the army, Brig. Gen. Mohammad al-Husseini, had $20 million while another ex-officer collected $16 million.

When and how the formal judicial action was initiated against Kahwagi and the other officers remains in question, a function of the lack of transparency in not only the Military Tribunal but the wider judiciary. Two defense attorneys told L’Orient Today the Higher Judicial Council, an administrative body that oversees the court system, referred the issue of the officers’ alleged graft to the Military Tribunal.

One of these lawyers, who spoke on condition of anonymity, claimed that the file was relayed by Judge Ghassan Oueidat — the country’s top prosecutor — to acting Military Tribunal prosecutor Fadi Akiki on Sept. 24, after Akl’s TV interview.

The lawyer added that the file included two names — Kahwagi and Husseini — while the other six ex-officers would come up later in Akiki’s investigation, which began on Sept. 29.

While gaining public attention as the first application of recently passed illicit enrichment legislation, the judicial action against the former officers moved forward weeks before the law went into effect and has stumbled over the issue of banking secrecy.

Akl was deposed by Akiki on Oct. 2, when the case was still in the hands of the Military Tribunal. Whether Wahhab gave any evidence to the judge remains in doubt: the politician could not be reached for comment, while Akl said he did not believe the former environment minister in Omar Karami’s 2004-05 cabinet met the judge.

Akl said that he met twice with the Military Tribunal prosecutor to present not only the information he showed on OTV about Kahwagi, but also data on other officers, whom he did not name to L’Orient Today. The attorney added that the file of his information was attached to Akiki’s investigative case.

Akiki’s investigation delved into the real estate properties, companies and funds of several top-ranking officers, Lebanon’s state-operated National News Agency reported, without providing further details on the probed officers and assets. The prosecutor’s inquiry hit a dead end when he requested the lifting of banking secrecy on accounts of the ex-officers.

Banque du Liban Gov. Riad Salameh objected to Akiki’s request on the grounds that the Military Tribunal judge lacked jurisdiction to access the information as per the new illicit enrichment legislation, Law 189 of 2020, according to the NNA. Salameh also heads the Special Investigation Commission, which can lift banking secrecy among its other competences.

Salameh’s BDL has an indirect ownership stake in Finance Bank, the financial institution that in 2015 granted Kahwagi and his family special banking privileges.

The case was referred to Oueidat — the public prosecutor in the judiciary’s highest tier — who then transferred the case down to Appellate Court of Beirut Public Prosecutor Ziad Abu Haidar. The eight officers in Akiki’s file were charged, and the case was handed over to Beirut’s lead investigative judge.

This transfer, sparked by the original investigator’s bank accounts request, has ironically held up the process to waive banking secrecy and look into potentially key evidence.

Judge Bou Samra has yet to request bank account information on the officers, according to three of the defense attorneys knowledgeable of the investigative judge’s case file, with one of them saying the case file includes other asset information like real estate data.

As per Lebanon’s laws and regulations regarding banking secrecy, Bou Samra has recourse to query the SIC or the National Anti-Corruption Authority, which has yet to be formed, for bank account information.

When looking into requests from the judiciary, the SIC investigates bank accounts for suspicious activity and then responds with an assessment, according to Imad Sayegh, a researcher at the independent judiciary monitor Legal Agenda who is looking into banking laws and the financial crisis.

The catch to these requests is that the SIC can provide assessments without justification, taking advantage of the fact that regulations do not explicitly require it do so, Sayegh said, adding that the body’s responses can be a simple statement that they found no suspicious activity.

“The SIC has wide competences, but it does not really use them,” the researcher said.

The steps to a successful prosecution or acquittal are many, with a number of opportunities for the case to be just another prosecution that dies within the maze of the country’s judicial system.

With the investigation now in his hands, Bou Samra first faces the defense attorneys’ procedural motions, technical filings that can challenge a court’s jurisdiction or seek to extinguish the case, among others.

The judge’s ruling on the motions, which is done after input from the appellate court’s public prosecution, can be appealed by any of the parties in the case, according to the criminal code. If the defense attorneys’ motions are rejected, Bou Samra will move forward with questioning of the ex-officers.

Two of the defendants, former army intelligence chief for North Lebanon Brig. Gen. Amer Hosn and former General Security official Ahmad al-Jamal, are currently outside the country. Jamal, who was convicted in absentia by the Military Tribunal last month in a bribery case, is reportedly a fugitive in the US, a country that has denounced corruption in Lebanon. Hosn, meanwhile, is also in the US, according to a source knowledgeable on his whereabouts, who added that the former intelligence official would return to Lebanon at the request of the judiciary.

If questioning of the officers goes ahead, Bou Samra afterward faces a number of options, including deeming the case to meet the threshold of a felony and referring it back to his public prosecutor to then transfer it to the Beirut Appellate Court Indictment Chamber. This legal body can then issue a formal accusatory decision and send the defendants to criminal court for trial.

Akl, the attorney whose accusations helped push the judicial action against the retired officers, isn’t hopeful the case will progress forward.

BEIRUT — Behind the headlines of the blockbuster illegal enrichment charges against Lebanon’s former army chief and seven other former security officers lies an opaque investigation that has failed so far to access the defendants’ bank account information.The circumstances of the case and how it has shuffled through the labyrinth of Lebanon’s widely criticized judiciary remains a point...