We should not mourn justice 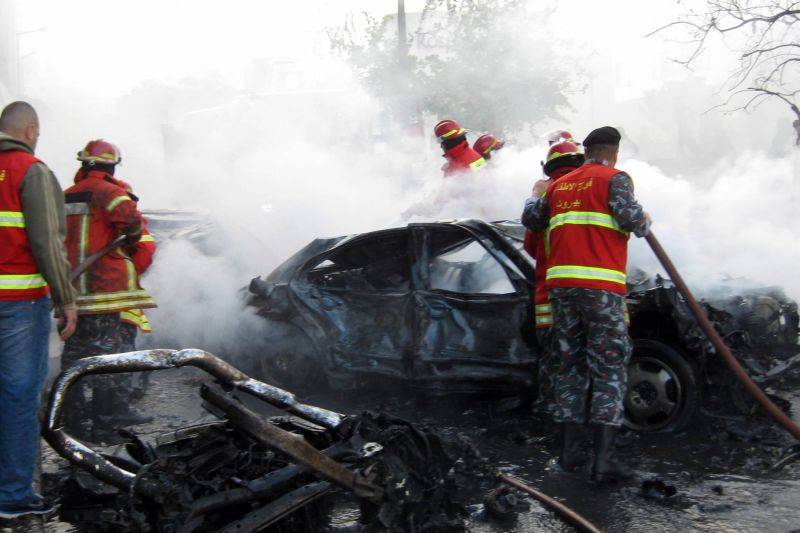 Two days after Christmas, I visited Martyrs’ Square, where my father, best friend and mentor, Mohamad Chatah, was buried following his assassination seven years ago.

Those that loved him continue to live with open wounds: no trial conducted; no consequence for known culprits; a car bombing that shattered Starco, tore through downtown Beirut, killed eight, injured 70 and echoed throughout the city. In the weeks thereafter, I was assured an investigation by those in power, insisting his assassination would not fade into the background. By everyone from former prime ministers to officials in and out of government, I was told that justice was around the corner.

I kept my silence for months that turned to years, waiting for promises to be delivered. Yet my father’s case, like too many assassinations before, was swept under the rug. I searched for answers in the Special Tribunal for Lebanon’s pending verdict on former Prime Minister Rafik Hariri’s murder, hoping for closure in an international body’s deliberations rather than false hope for a local trial. Despite my father’s assassination not falling under the tribunal’s jurisdiction, the political motive that connected multiple murders together was clear. I waited until August this year, days after the port blast traumatized the nation to its core. With hard facts provided, the tribunal found a single Hezbollah member, Salim Ayyash, guilty of involvement in Hariri’s death. And that sole individual remains free.

We are cursed with collective injustice — from the psychological and physical scars of civil strife rarely addressed to the wreckage and havoc caused by one of the largest non-nuclear blasts in modern history. An inability to see criminals arrested or conduct impartial investigations without subversion. Victims are forced to cope in private. Poetic justice preserves the honor and dignity that lives within us.

We chanted in years past for sovereignty and accountability — from the March 14 bloc’s calls in 2005 to end Syrian hegemony to the You Stink movement’s fight in 2015 against corruption and incompetence. But Lebanon today is nearing the brink of no return. And we are only one year removed from the magic of 2019’s Oct. 17 uprising.

Chants for economic respect and political accountability defined our most recent revolt, aimed at ending the Civil War era once and for all and putting all political leaders on the same level. “Killun yaani killun” (“all of them means all of them”) became the unifying call that brought us to the streets. Yet today, though demands for the removal of an unpopular political class linger, they will likely fade unless justice takes hold. And for Lebanon to live, all aspects of reform to who determines peace and war must be addressed. And that discussion must include Hezbollah’s weapons.

It is a fact that the protesters who took to the streets following Oct. 17 were blaming all political parties for our status quo. And it would be absolutely false to suggest that Oct. 17’s aspirations and March 14’s demands are one in the same. But voices that effectively challenged the status quo prior to Oct. 17 were not debated through dialogue. They were suffocated and killed. My father’s final words, posted on Twitter minutes before the car bombing that took his life, reflected that sentiment: “Hezbollah is pressing hard to be granted similar powers in security and foreign policy matters that Syria exercised in Lebanon for 15 years.”

Neutrality and disassociation from regional conflict was my father’s goal. Implementing a foreign policy that would shield Lebanon from regional crises to allow us — in my father’s words — to “catch up for lost time.” He made the case that since the Cairo Accords of 1969 and the Palestine Liberation Organization’s military involvement within Lebanon’s borders, we had surrendered our decision-making to outside influence and could no longer govern ourselves.

Despite a financial crisis, the COVID-19 pandemic and an ammonium dump catastrophe, Oct. 17 won its share of victories. Perhaps above all, Lebanese “resiliency” was rightfully redefined. The phoenix buried itself on Aug. 4 amidst ash and rubble. Proud protesters said “enough!” Freedom of expression and citizen mobilization met with intimidation, yet they prevailed. Courageous youth pushed back against security forces and chased ministers and MPs out of restaurants. Government officials were rightly denied appearances in Gemmayzeh and Mar Mikhael. Civil society stepped in where state institutions opted out. Volunteers led rehabilitation efforts. Residents swept fallen debris and sheltered those robbed of their homes. Food and clothing were generously provided, and donations from abroad were sent to local NGOs determined to help, avoiding rulers better known to plunder.

Armed “Resistance,” however, did not run dry. Nabatieh, like Tripoli, defined the protest movement in its early days. Hezbollah was included in chants against the ruling class, yet within weeks, violent counterprotests drove enough thawra supporters away. And among groups supporting the principles of Oct. 17, many are inclined to set aside the issue of Hezbollah’s weapons altogether.

Perhaps out of concerns of alienating Hezbollah sympathizers or outright fear of retaliation, the strategy is flawed. Despite dreams to the contrary, it is impossible to rebuild Lebanon while a sub-state proxy remains armed and thrives on a continuation of the status quo. Removing the discussion about weapons is removing any chance at Lebanon’s revival and delaying justice for future generations.

My father believed the only way out of our current impasse is by limiting regional conflict on local decision-making, thereby laying the foundation for state rebuilding. Letting us tackle economic problems without geopolitical considerations. Allowing politics to take its course away from the regional posturing of zealots, despots and the like. A long-term policy that would dislodge us from perpetual chaos, heal our wounds and deliver lasting postwar reconstruction. He held the view that the breakdown of state institutions from 1969 onward led to lawlessness and internal strife, repeated Israeli invasions, Syrian occupation and today’s mafia-militia dominion. And for reform to see the light of day, all militias need to become part of our history.

Crimes cannot be shielded for the sake of sensitivity. Recent variations of “national debate” over sub-state weaponry is all but dictated on Hezbollah’s terms. Dialogue for the sake of dialogue is simply a process without solutions. The 2012 Baabda Declaration of disassociation from the Syrian war was signed by Hezbollah and effectively ignored. In a blog post he shared on Oct. 11, 2012, my father wrote that “unfortunately — but predictably — Hezbollah’s actions and positions … have poured cold water … on the Baabda principles.” And in a tweet dated Nov. 14, 2013, he described the three options Hezbollah is offering Lebanon: “outsourcing state sovereignty to them; falling into civil war; or pushing for divorce.” None bodes well.

On the other side, principles, fantastical or not, are the only pillars we can build from. There is simply no place for an armed Hezbollah should Lebanon turn the page and put an end to half a century of violence and decay. Selective justice is inconsistent. And 30 years since the official end of the civil war, inconsistency defines our postwar order: intermittent waves of prosperity followed by periods of battle, breakdown and failure. Security and foreign policy may not be Oct. 17’s priority, and emphasizing local problems remains the backbone of continued chants for change, but ignoring sovereignty will lead to collapse.

Last year, this time of year, I joined thousands of protesters hopeful for their future. Passion on display, our national pride in full sight. And today, Martyrs’ Square is silent. I used to walk here with my father before he became a public figure. We visited Rafik Hariri’s makeshift tomb together on several occasions in 2005. Back then, spray-painted repeatedly across posters and walls was the word meant to end political violence once and for all. A norm robbed for most of our modern history. And a defining principle that matters most:

Ronnie Chatah is the host of the Beirut Banyan podcast and the founder of the WalkBeirut tour.

Two days after Christmas, I visited Martyrs’ Square, where my father, best friend and mentor, Mohamad Chatah, was buried following his assassination seven years ago.Those that loved him continue to live with open wounds: no trial conducted; no consequence for known culprits; a car bombing that shattered Starco, tore through downtown Beirut, killed eight, injured 70 and echoed throughout the...