In his annual speech on Aug. 31, Parliament Speaker Nabih Berri drew the profile of the presidential candidate he would support 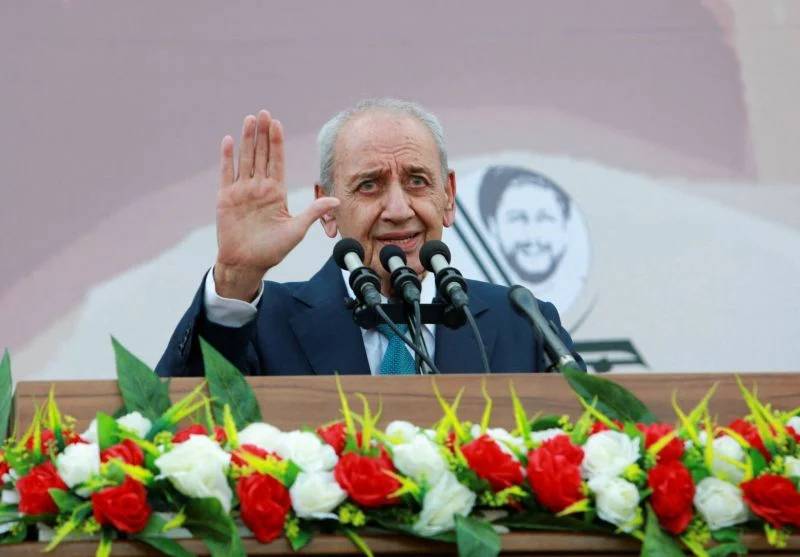 Parliament Speaker Nabih Berri chose to emerge from a long political silence on Aug. 31, the eve of the start of the presidential election period, to choose the successor of current President Michel Aoun, whose term expires on Oct. 31.

Speaking to a large crowd in Sour, Berri did not pull any magic tricks in a bid to facilitate the election of a new head of state. However, he made sure to set the red lines that his political opponents, namely Aoun and Free Patriotic Movement head Gebran Bassil, should not cross.

He also criticized the Aounist camp both for the impasse in cabinet formation as well as on the maritime border — an issue he considers himself to be leading.

For the 44th commemoration of Amal Movement founder Musa al-Sadr’s disappearance, Berri, who is also the head of the Amal Movement, delivered a long speech before an audience of political figures and throngs of supporters at a rally in Sour, Amal’s undisputed stronghold.

In addition to the state of the country sketch that he usually draws up during this annual meeting, Berri was keen on dedicating a good portion of his speech to direct messages to the president and his close associates.

“It is forbidden to tamper with the Constitution in order to serve the ambitions of one candidate or another,” Berri said, in a jab at Bassil, who is accused of wanting to succeed his father-in-law, Aoun, to the presidency.

The speaker also stressed the importance of respecting the constitutional deadline of Oct. 31 and holding the election on time, highlighting the role of Parliament in being “representative of the people.” Parliament is the body that ultimately elects the country’s presidents.

But the fact remains that Berri was careful not to suggest a specific date for Parliament to convene for the first session to choose the next head of state.

Being well aware that an agreement on the next president has not yet materialized, Berri has shown himself to favor any meeting that could lead to an understanding.

In his speech, Berri also made sure to draw the profile of the president for whom his party would vote, listing characteristics that do not match FPM leader Bassil.

“Just as he needs to be accepted by Christians, the president has to have Muslim and national endorsement as well,” Berri said. The words were an apparent jab at Bassil, who is known to advocate what he calls “Christian representativeness” as a primary trait of the next president.

“We will vote for the one who believes in Lebanon’s [Arab character], and for a candidate who can bring people together, and whose election would not be [interpreted as] a challenge to the will of the Lebanese,” Berri said, a way to express his opposition to elect Bassil.

The most despised public figure during the Oct. 17, 2019, uprising, Bassil has not officially declared himself a candidate for the presidency.

Berri had another political rival in his crosshairs: Lebanese Forces leader Samir Geagea. Relations between the two faltered in the wake of Beirut's Tayyouneh district clashes in Oct. 2021 between armed men allegedly belonging to the LF and supporters of the Amal Movement and Hezbollah.

In his speech, Berri made sure to also express his disapproval of Geagea heading to the Baabda Palace. He also undercut the LF leader’s proposal for electing a “defiant president” to face the Hezbollah camp.

As he waits for the dust to settle on the presidential election, Berri appears to have government formation in his sights.

Forming a cabinet with full powers would cancel any pretext by the Aounist camps to keep Aoun in Baabda beyond Oct. 31.

Berri made sure in his speech Wednesday to pressure Prime Minister-designate Najib Mikati to restart the cabinet formation process after a long hiatus, saying he was ready to “collaborate to facilitate the formation of a cabinet that can face the challenges facing the country.”

Here, Berri also mentioned a few red lines not to be crossed. The speaker castigated the presidential camp’s proposal to add six ministers of state to the caretaker cabinet, something that would tip the balance in favor of a certain political group, which would imbue the body with a more political character.

Tracy Chamoun to L’Orient-Le Jour: ‘I want to be a unifying president’

“We do not want to repeat the [Tammam] Salam experience, when every minister became president,” he said. At the time, during Salam’s term as prime minister the cabinet headed by then Prime Minister Tammam Salam had exercised the prerogatives of the head of state from the end of former president Michel Sleiman’s term until the election of Aoun in 2016.

Berri slammed Aounists’ threats not to allow Mikati’s outgoing cabinet to assume the functions of the head of state, reminding everyone of his prerogatives as Parliament speaker. He opposed all inaccurate interpretations of the Constitution, recalling that this task falls exclusively within the Parliament’s remit.

Meanwhile, in an interview with the pro-Hezbollah daily al-Akhbar on Tuesday, Bassil did not rule out Aoun’s remaining in Baabda Palace as an option or galvanizing efforts to remove Mikati from his post as premier-designate. 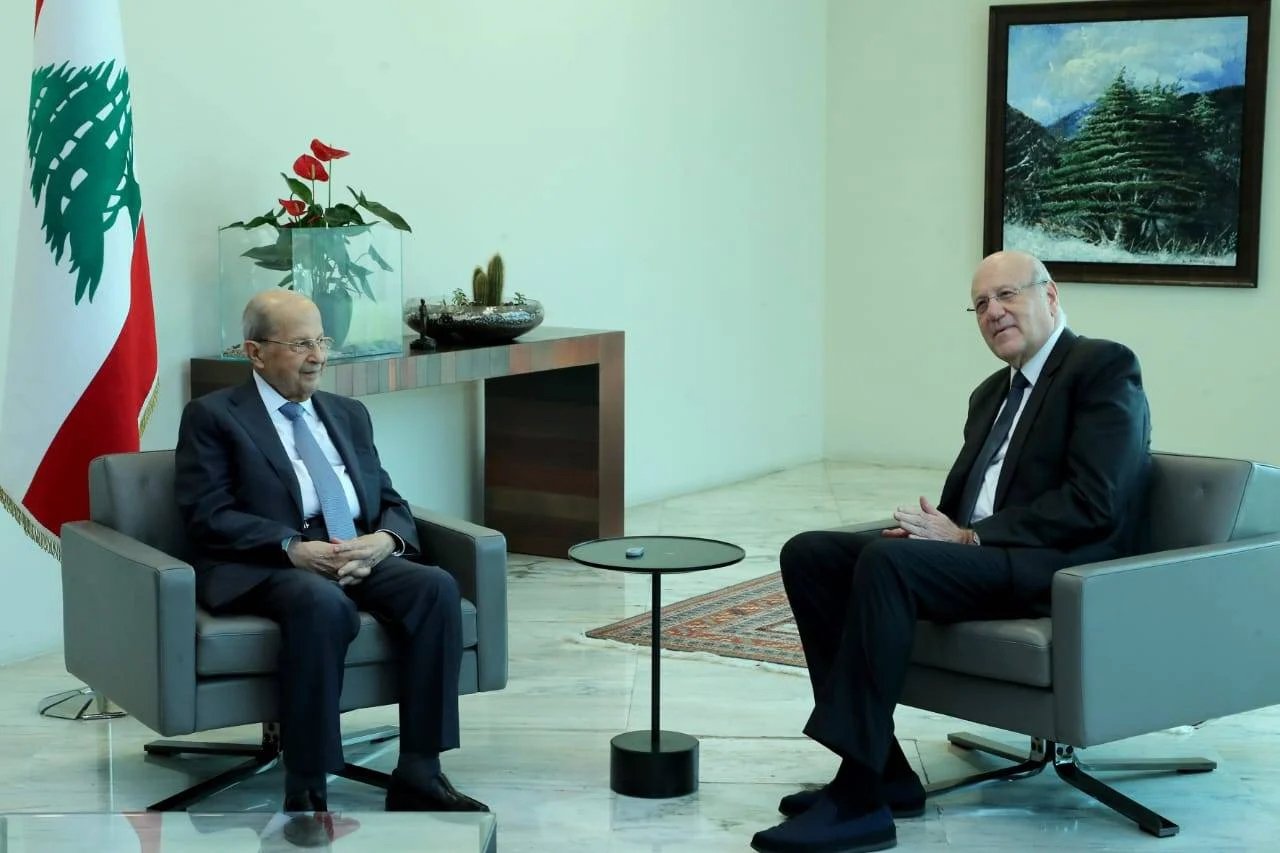 The Sunni billionaire appears determined to avoid further confrontation with Bassil and to continue trying to reach out to the presidential camp.

Mikati met again with President Aoun Wednesday, a week after their last meeting.

According to presidential sources who spoke to L’Orient-Le Jour, the meeting did not end in any breakthrough, and points of view are still divergent.

L’Orient-Le Jour has learned, however, that the two men have again discussed the option of changing the cabinet lineup.

Mikati is said to have agreed again with Aoun on appointing two new ministers to replace caretaker Economy Minister Amin Salam (a Sunni close to Baabda), and caretaker Minister of the Displaced Issam Sharafeddine (a Druze close to the leader of the Lebanese Democratic Party, Talal Arslan).

Aoun is also said to have called for a broader reshuffle and the replacement of Deputy Prime Minister Saadeh al-Shami with Wadih Absi, a businessman.

Why does want Aoun the removal of Shami, an expert within the International Monetary Fund and head of the Lebanese delegation negotiating an agreement with the IMF to extricate the country from the worst economic crisis in its history?

At the end of Sept. 2021, Aoun had tried to appoint two of his advisors to the Lebanese delegation, in a bid to have a say in the matter — a maneuver that was blocked by both Mikati and Shami.

This article was originally published in French in L’Orient-Le Jour. Translated by Sahar Ghoussoub.

Parliament Speaker Nabih Berri chose to emerge from a long political silence on Aug. 31, the eve of the start of the presidential election period, to choose the successor of current President Michel Aoun, whose term expires on Oct. 31.Speaking to a large crowd in Sour, Berri did not pull any magic tricks in a bid to facilitate the election of a new head of state. However, he made sure to set the...