Will Berri succeed in defusing tension between Aoun and Hariri in today’s parliamentary session?

Parliament is set to convene on Friday to address the deadlock in cabinet formation. The session is likely to be heated as the Future Movement and its allies are set to face off against the Aounist camp over the current political paralysis. 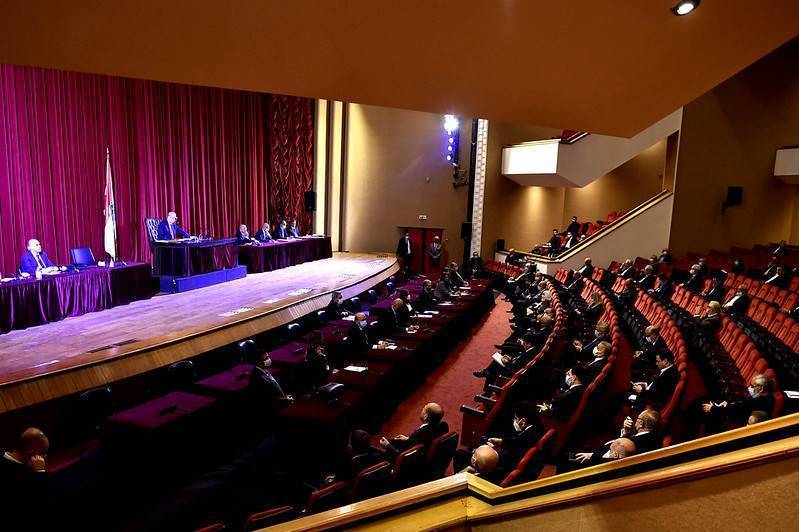 Parliament will meet at the UNESCO Palace. (Credit: Lebanese Parliament)

Parliament Speaker Nabih Berri, who yesterday summoned MPs for a plenary session to discuss the letter he received on Tuesday from President Michel Aoun — in which the latter implicitly accused the Prime Minister-designate Saad Hariri of obstructing cabinet formation — will have to deploy all his political savvy in a bid to defuse tensions and calm the simmering situation.

In his missive, Aoun said that Hariri was unable to set up a cabinet, blaming him for the deadlock and the “negative political, social and economic consequences of further delaying cabinet formation on the institutions and the country’s political stability.”

The president’s letter not only sparked an angry outcry from Hariri but also from a handful of Sunni former prime ministers, i.e., Fouad Siniora, Tammam Salam and Nagib Mikati.

In a statement issued Wednesday, the former premiers said that the president’s missive constituted a “serious violation” of the constitution and was “full of errors.”

The president’s letter “changes the facts to shift the blame onto Saad Hariri for the delay in the cabinet formation,” the statement said. Siniora, Mikati and Salam accused the president of “obstructionist and unconstitutional maneuvers.”

According to them, Hariri has respected the constitutional process from start to finish.

The rocky relationship between Hariri and Aoun, which appears to have reached the point of no return, is likely to take on an even stronger confessional dimension on Friday.

These vitriolic exchanges are just a sample of what might unfold in the parliamentary session when MPs will be called upon to comment on the content of the letter.

By throwing the ball back into Parliament’s court, Aoun hopes to lay the matter at the MPs’ feet and wash his hands of the persistent stalemate.

It has been posited that the president also hopes to get a vote in favor of removing the premier-designate from his post. Or at least to push him to step down — Aoun has rejected such contentions.

A source from the Presidential Palace told L’Orient-Le Jour that the head of state appealed to Parliament as a call for help and said the sending of the letter is in no way a move to circumvent the constitution.

In the letter, Aoun states that the president is “the guardian of the constitution and is watchful as to prevent any erroneous constitutional jurisprudence” in the formation of governments.

The constitution text, however, does not mention a deadline for cabinet formation, nor does it call for removing the premier-designate should he fail to present a ministerial lineup within a well-defined time frame.

But it is Hariri alone who can decide whether or not he steps down from his designated role — and he has not yet officially expressed any intention to give up the post.

“Only the deterioration of the political situation could push him to throw in the towel, not anyone else or any procedure,” a former MP said.

What are the plausible scenarios?

This impasse renders Berri’s mission even more difficult. Parliament cannot shirk its responsibility and will have to decide, one way or another, on the president’s request.

As per the constitution and Parliament’s internal regulation, the speaker has to conduct a debate during the session before calling for a vote on the issue. During such a debate, Berri will face the likely trying task of facilitating exchanges and limiting disputes so as to prevent the discussion from becoming overly heated.

“Nabih Berri wants to calm things down above all else. He will make sure to fulfill his constitutional duties while avoiding transgressions,” a source close to the speaker told L’Orient-Le Jour.

One potential scenario is that Berri carefully selects ahead of the session a few MPs to discuss the matter and then adjourns the meeting, which could extend the debate over a few days.

“The vote is not necessarily required if MPs fail to come up with a recommendation, which is a likely outcome. What decision can they take in this case?” said Antoine Sfeir, a lecturer at the Saint Joseph University in Beirut.

One ought to mention that Hariri cannot be recused and that the legislature cannot push him to step down.

“As long as the constitution does not provide for any solution to such a dilemma, the president’s letter is meaningless and will not lead to any solution,” a constitutional expert said on condition of anonymity.

Nevertheless, he added, the vote is required and could take place on the same day or at any other session scheduled to continue the debate.

Having distanced itself from the growing polarization of Haririans and the Aounist camp in a bid to play the compromise card, the Progressive Socialist Party of former MP Walid Joumblatt is likely to assist the speaker in his task at Friday's session.

“We hope that the discussions will not be orchestrated with the aim of escalating the debate,” Saleh Hdayfeh, the PSP spokesman said.

Berri’s parliamentary bloc’s position is to be more clearly defined today after its weekly meeting.

Parliament Speaker Nabih Berri, who yesterday summoned MPs for a plenary session to discuss the letter he received on Tuesday from President Michel Aoun — in which the latter implicitly accused the Prime Minister-designate Saad Hariri of obstructing cabinet formation — will have to deploy all his political savvy in a bid to defuse tensions and calm the simmering situation.In his missive,...