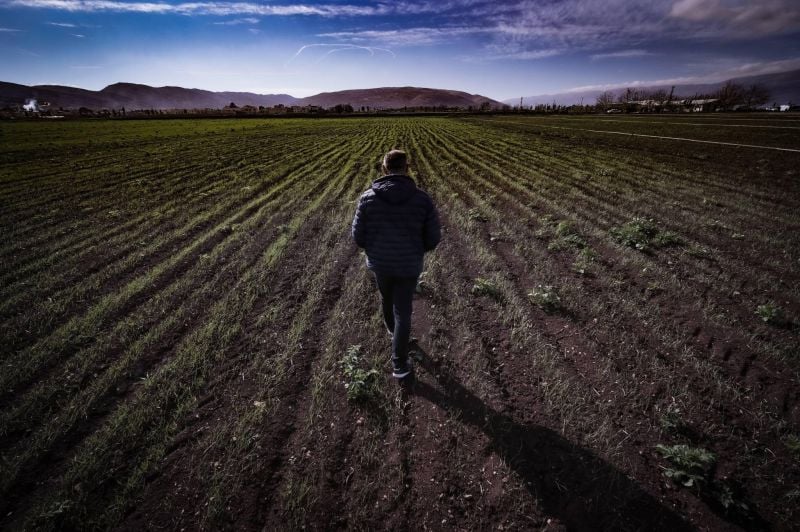 SAADNAYEL, Zahle — Saudi Arabia’s ban on Lebanese fruit and vegetable imports has come at a pivotal time for Lebanon’s agricultural sector. Local farmers, who rely heavily on imported supplies of seeds, fertilizers and other agricultural inputs, have been struggling to pay bills amid the lira’s ongoing devaluation and difficulties in accessing US dollars.

Even before the kingdom announced its ban, many Lebanese farmers had cut back on planting or switched from farming produce to cultivating lower-cost crops such as wheat and, in some cases, cannabis. Still others have gotten out of the business entirely.

Now the ban, and the prospect that other Gulf countries could follow suit, is an added blow.

Saudi officials announced the ban late last week, saying it was prompted by the discovery of narcotics hidden inside numerous produce shipments coming from Lebanon since the beginning of 2020. Most recently, a shipment of pomegranates was found to have been filled with more than 5 million pills of Captagon, an amphetamine. The Lebanese have claimed the shipment had originated in Syria, making its way across the land border to the Beirut port, where it transited to Jeddah.

“All forms of bad fortune are falling on the head of the Lebanese farmer at once,” Youssef Mahieddine, the head of Lebanon’s agricultural syndicates union, told L’Orient Today. At a press conference on Wednesday, he accused Lebanese authorities of allowing or encouraging smuggling, adding, “We fear that this policy may inevitably lead farmers to bankruptcy, which will force them to sell their lands.”

How big of a problem is the Saudi ban for Lebanon’s agriculture sector?

Saudi Arabia is among the top export destinations for Lebanese produce. According to Lebanon’s Investment Development Authority, in 2019 the kingdom purchased the largest share of Lebanon's agricultural exports of any single country — or about 22 percent of the exports, which that year totaled $193 million. Arab countries accounted for 77 percent of the agricultural export market.

Kanj Hamade, an assistant professor of agricultural economics and rural development at the Lebanese University, told L’Orient Today that the crops most likely to be impacted by an extended Saudi ban include potatoes, citrus fruits, apples and grapes. While the potatoes could be stored and sold on the local market, he said local demand for the fruits would likely be low, and much of the crop could go to waste.

How much of a hit the sector will actually take will depend on how long the ban continues.

Riad Fouad Saade, the director of the Lebanese Center for Research and Agricultural Studies, noted that because Lebanon is still at the beginning of its main harvest season, the ban’s impact will be relatively limited if Lebanese and Saudi authorities can reach an agreement quickly.

“Since we are at the start of the season, it’s not that harmful, I would say, for three, four, five days … one week,” Saade said. “It will start to be harmful a bit later.”

Hamade agreed that for the time being, the effects will be limited, but added, “The grace period is not that long.”

The impact on farmers

Different classes of farmers will be affected differently by the debacle.

“There are agricultural investors, traders, who are also exporters, who plant thousands of dunams [1,000 square meters — about a quarter acre] of agricultural land. … Then you have the small- and medium-size farmers,” Mahieddine told L’Orient Today.

The large operators “have a more secure situation,” because they are usually politically connected and benefit from access to subsidized dollars for agricultural inputs, while small-scale farmers are in a more precarious position.

When it comes to the export market, the traders and large operators are the ones who benefit directly from the injection of foreign currency, while small farmers generally sell their products to wholesale merchants and get paid in lira.

However, Youssef Abdel Ghali, a farmer in the Bekaa Valley community of Dalhamieh, whose crops include broccoli, zucchini and wheat, said that even those who get paid in lira still benefit from the export market because demand from the export market pushes prices up, and goods for export fetch a higher price. That is particularly important because local demand is shrinking.

“In the economic crisis we’re in, people [in Lebanon] are no longer able to buy as much as they used to,” he said.

Decreased prices on the local market

As for the effects the ban will have on the local market, Saade said, “We can say prices will go down, and there will be some more [produce on] offer in the domestic market.”

The American University of Beirut’s Crisis Observatory project, which has been tracking food prices during the month of Ramadan, showed an decrease in prices reported Tuesday, two days after the ban took effect, compared with those from a week earlier for some fruits and vegetables, including onions, cucumbers and radishes.

That could be a silver lining for cash-strapped Lebanese households. Jad Chaaban, an associate professor of economics at AUB said, that if the ban continues, “the losers are the traders … and the winners are the consumers.” The majority of farmers, who were already seeing minimal benefits from exports to Saudi Arabia, he said, would probably not see much change in their circumstances.

But Hamade noted that even farmers who were not receiving major profits from the export market could be hurt by the flood of products on the local market.

“The local market will be oversupplied,” he said. “The farmers will then be hurt by the reduction in the wholesale price here, which is problematic for them, obviously, and for the overall stability in rural areas,” where the agriculture sector is a major employer of Syrian refugees.

The Saudi move has touched off a flurry of high-level meetings and promises by Lebanese officials to crack down on narcotics smuggling through the produce sector.

President Michel Aoun promised on Wednesday that “security apparatuses will tighten control over the export movement from Lebanese land, sea and air facilities to reassure countries that receive Lebanese agricultural and industrial products.”

Following a high-level meeting at the Presidential Palace earlier in the week, he tasked the caretaker finance, economy, industry and trade ministers to amend the procedures for foreign trade goods passing through Lebanon in order an apparent attempt to curtail the risk that further drug-laden shipments transit through Lebanon. He also assigned the caretaker interior minister to coordinate with the Saudi authorities on the Captagon pills case that led to the ban

How long the ban lasts may depend on the goals behind it. Some have accused Saudi Arabia of using the trade issue to increase pressure on Hezbollah in Lebanon. However, Hamade noted that if this is the goal, the kingdom may have missed its mark, as the fruit crops likely to be most impacted by the ban do not tend to be grown in the parts of the country where the party has its constituency.

Meanwhile, Mahieddine told L’Orient Today that farmers are worried the Saudi move could present an opening for competition from Lebanon’s southern neighbor in the Gulf markets.

While no clarity has emerged yet on the duration of the Saudi ban, some expressed hopes that the issue would be resolved soon.

Ibrahim Tarshishi, the head of the Bekaa Farmers Association, said that so far, the state appears to be taking the steps it needs to.

“The meetings that are happening are very good, and it appears that the Lebanese government is taking an interest at all levels and in all its institutions,” he said. “God willing, we will get out of this nightmare soon.”

But for some of the farmers, it can’t come soon enough.

“Everything's coming together to increase the costs for the farmer, and if he’s not able to sell the produce for an amount that will cover the costs, he’s going to go broke,” Abdel Ghali said.

SAADNAYEL, Zahle — Saudi Arabia’s ban on Lebanese fruit and vegetable imports has come at a pivotal time for Lebanon’s agricultural sector. Local farmers, who rely heavily on imported supplies of seeds, fertilizers and other agricultural inputs, have been struggling to pay bills amid the lira’s ongoing devaluation and difficulties in accessing US dollars.Even before the kingdom announced...