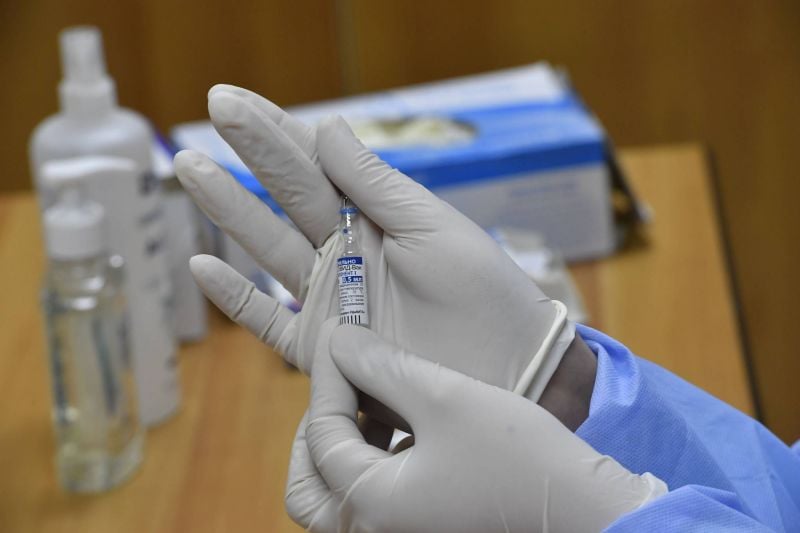 A health care worker prepares to administer a dose of the Sputnik V COVID-19 vaccine in Lebanon. (Credit: Nabil Ismail)

The initiative appears to be the most widespread campaign by a political party to distribute vaccines, with MPs and party officials reaching out to municipalities, religious organizations and party offices across the country to sign people up for inoculations.

Alongside the Future Movement, several individual MPs from other parties are also launching their own efforts, raising questions over the use of COVID-19 vaccines as a tool to secure political support.

The emergence of the politicians’ vaccination campaigns comes amid criticism over the slow rollout of the Health Ministry’s public vaccine campaign. In the past two months, some 230,000 doses of vaccines have been administered through the ministry’s program — enough for only a sliver of the population.

To speed things up, the ministry has welcomed private initiatives wishing to import and distribute vaccines. About 30 companies have been granted approval from the ministry to do so, but only one has so far been able to secure doses.

Hariri is negotiating with contacts in the United Arab Emirates, where he has close business and political ties and has made regular visits in the past few months, for a donation of the Chinese-made Sinopharm vaccine, according to MP Hady Hobeiche (Future/Akkar). The quantity is still under discussion.

“When his excellency told us about this, I started contacting people I know to register and asked municipalities to sign people up,” he said. “The Future Movement and the MPs are registering everyone who wants to be vaccinated.”

The Municipality of Qobeiyat, in Akkar, announced on March 21 that the town’s residents could sign up for the Sinopharm vaccine as a result of the “gracious efforts of MP Hady Hobeiche, as part of the donation being presented by Prime Minister Saad Hariri.”

The municipality has its own online platform where people can sign up, provided that they also register on the Health Ministry’s vaccination platform.

Some 700 people have signed up so far, according to Joseph, a member of the municipality’s crisis unit, who declined to give his family name. The platform was not created exclusively for the vaccines promised by Hariri, he said, but so that the municipality is prepared “for any donation that might come.”

Just over 2,000 residents of Qobeiyat have registered on the Health Ministry’s platform.

According to MP Mohammad Hajjar (Future/Chouf), the Future Movement is also using its network across the country to build a list of people interested in receiving the Sinopharm vaccine.

“In every village, there are officials and supporters of the Future Movement who come to the party’s offices and get [registration] forms to distribute among the people,” he said. “We are gathering our own data.”

“The benefit of registering with us is that we can perhaps provide the vaccine faster,” Hajjar added.

The parallel vaccination campaign being led by the parties comes in the leadup to the parliamentary elections scheduled for May 2022.

However, the Future MPs denied that the drive to register people for the Sinopharm vaccines was an attempt to secure electoral support. All four lawmakers L’Orient Today spoke with insisted that the Sinopharm vaccine, should it arrive, will be accessible for anyone who wants it — not just party supporters — and that vaccines will be administered at registered vaccine centers.

“If someone wants to come and register for the vaccine, they are welcome to,” said MP Nazih Najem (Future/West Beirut). “Hariri is the prime minister [designate], of course he is bringing vaccines for all. We are not buying anyone.”

MP Othman Alameddine (Future/Minyeh) said that he had contacted Greek Catholic authorities in his district to also invite people to register for the vaccine. “It is not sectarian or political,” he said. “Those who have priority [in terms of age and health] will get it first.”

Petra Khoury, a health adviser to caretaker Prime Minister Hassan Diab who heads a committee for monitoring the vaccination rollout, said she was not aware of the party’s initiative.

She said the only private entity she is currently working with is Pharmaline, a pharmaceutical company owned by businessman Jacques Sarraf that made a deal for 1 million doses of the Russian-made Sputnik V vaccine.

Other lawmakers are also attempting to secure vaccines, though their efforts appear less coordinated and widespread than the Future Movement’s campaign.

Last week, Lebanese Forces MP Antoine Habchi launched an initiative to obtain vaccines for his constituents in Baalbeck-Hermel, calling on “all charitable people, the private sector and Lebanese expats” to work to secure the largest possible number of vaccines.

Any vaccine donations will be gathered by an NGO, the Cedars Medical Association, with people invited to register their interest at one of Habchi’s three offices — in Ras Baalbeck, Dbayeh or Deir al-Ahmar.

An NGO associated with the Lebanese Forces — the Cedar’s Mountain Foundation — has obtained 5,000 doses of the Sputnik V vaccine from Sarraf’s Pharmaline, treasurer Leila Geagea said.

Sarraf was the first person from the private sector to be able to import COVID-19 vaccines to Lebanon. The first 50,000 of some 1 million doses of the Sputnik V vaccine arrived in Lebanon last week, and on Tuesday staff at Middle East Airlines received them.

The Cedar’s Mountain Foundation, which is headed by MP Sethrida Geagea (LF/Bsharri), has begun registering residents of Bsharri, where the Lebanese Forces enjoys strong support.

However, Leila Geagea said the vaccination campaign has nothing to do with politics.

“Our foundation works for the district of Bsharri, independently of political affiliation,” she said. “We are not going to offer [vaccines] only to Lebanese Forces people, but to anyone in the district.”

Daher confirmed that he had obtained Sputnik V vaccines from Pharmaline to be distributed via the Michel Daher Social Foundation, but would not disclose the number of doses.

The Makhzoumi Foundation has so far been unable to secure vaccines, though it was one of the first groups to announce its interest in importing inoculations.

“We are in discussions with the Health Ministry to see if we can import vaccines,” said Bernard Bridi, the foundation’s vice president for communication.

Bridi said the Makhzoumi Foundation’s campaign was apolitical, pointing to the fact that it has been operating for more than 20 years, far longer than Makhzoumi has been in Parliament.

“We do not discriminate, and we are completely separate from the political party.”

However, the efforts of political groups, whether directly or via NGOs, reflect a historic trend of parties exploiting holes in the public health sector for their own political gain, said Fahad al-Sudaid, a physician and fellow at the Synaps Network, a research organization, where he focuses on health care.

In the decades since the end of the Civil War in 1990, which destroyed much of the country’s health care system, Lebanon’s public health sector has been neglected. Though public hospitals house about 15 percent of all hospital beds, they receive only about 2 percent of the Health Ministry’s budget, according to research by the American University of Beirut’s Knowledge to Policy Center.

In the absence of a strong public health care system, a burgeoning private health sector has emerged, including dozens of NGOs, health care providers and dispensaries that are run by or affiliated with political parties.

“The gap left by the Health Ministry has allowed those with power, mostly the political elite, to create their own health networks,” Sudaid said. “This is not a new concept in the health sector.”

As a result of the vaccine rollout’s slow pace, “the middle class is getting the vaccine [from the private sector],” Sudaid said, “and the political class is providing the vaccine for those who have no other options but to go to politicians.”

BEIRUT — The Future Movement is registering residents across Lebanon for COVID-19 vaccines that the party’s president, Prime Minister-designate Saad Hariri, is trying to secure from abroad, Future MPs told L’Orient Today.The initiative appears to be the most widespread campaign by a political party to distribute vaccines, with MPs and party officials reaching out to municipalities,...