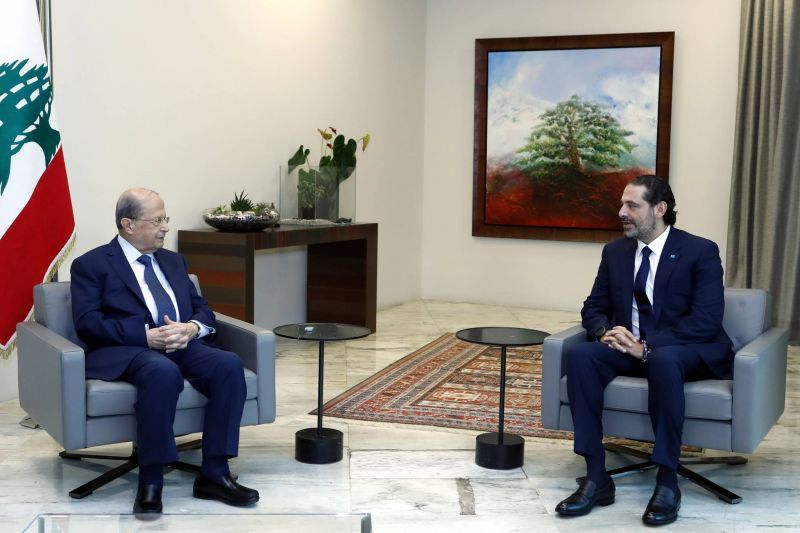 President Michel Aoun and Premier-designate Saad Hariri meet in October after the latter was nominated to form what would be his fourth government. (Credit: Dalati & Nohra)

BEIRUT — As negotiations over the formation of a new government drag on, top politicians appear to have added a new angle: a high-stakes game of chicken over electricity supply — with the Lebanese people caught in the middle.

“We are nearing a blackout and I don’t think that MPs will accept being witnesses to this situation,” caretaker Energy Minister Raymond Ghajar, an ally of the Free Patriotic Movement, said Thursday after a meeting with President Michel Aoun, the FPM’s founder.

At issue is a LL1.5 trillion bill to fund state-run Électricité du Liban through 2021. The urgent draft law was put forward by four MPs in the FPM’s caucus, but does not appear on the agenda of Parliament’s Friday session.

“The solution is in the hands of [MPs],” Ghajar said.

But parliamentarians from outside the FPM’s sphere blanched at the suggestion.

MP Faysal Sayegh (PSP/West Beirut) labeled Ghajar’s comments a form of “blackmail,” arguing that parliamentarians are being forced to choose between “turning off the lights, which MPs will be held responsible for, or funding EDL without reforming the sector.”

This sentiment was echoed by MP Yassine Jaber (Amal bloc/Nabatieh), who asked whether “it’s possible to allocate $1 billion out of nowhere … without reforming the sector.”

Despite Lebanon’s crushing financial collapse, the government still has access to Banque du Liban’s official exchange rate of LL1507.5 to the US dollar — although using it to import fuel and equipment for EDL would further deplete the central bank’s foreign currency reserves, which have sharply fallen from their pre-crisis high of nearly $37 billion to around $17 billion today.

The bill would not only eat into BDL’s remaining reserves, it would potentially prolong a familiar pattern of mismanagement of the electricity sector that has cost the state billions since the end of the 1975-90 Civil War.

For decades, the treasury has been providing the state electricity monopoly with installments to cover chronic budget deficits, contributing some $43 billion to the country’s debt burden by 2018 — 46 percent of the total — according to research by Bank Audi.

EDL has been recording a deficit since the 1990s, mainly due to high production costs to generate electricity and a failure to collect enough revenue from its consumers.

“We made a mistake last year by providing them the funds, expecting reforms from [Hassan] Diab’s cabinet,” Jaber said, referring to the current caretaker government. “Do you want deputies to hand them the money [without reforms] and ‘see you next year’?”

Jaber underlined the urgency of forming a government to restructure and reform the electricity sector, in line with international demands, before handing over the requested funds. Major reforms cannot typically be carried out by a caretaker government.

The link to cabinet formation was also made by the chair of Parliament’s energy committee, MP Nazih Najem (Future/West Beirut).

“Without a government, it’s all talk,” Najem said of the bill to fund EDL, adding that “the money will be tossed into the sea.”

Multiple attempts to reform the sector have been made over the past two decades, but political differences have left the efforts dead in the water. That impasse could potentially break, however, as pressure builds on senior politicians to form a government and deliver reforms.

Another possibility put forward by several MPs is that a stop-gap measure could be employed instead: the president, caretaker premier and finance minister could make partial transfers to EDL from budgetary reserves — potentially delaying a final showdown until funds are exhausted.

Still, some in the FPM see the matter as a weapon being wielded against them.

“The electricity issue is definitely being used as a [political] tool to add pressure on the president,” one FPM parliamentarian told L’Orient Today on condition of anonymity. Another echoed the sentiment.

The president and Saad Hariri have been at loggerheads since Parliament — without the support of FPM lawmakers — designated the former premier to form a new government in October. Both men must agree on the composition of the next cabinet.

But Hariri and Aoun, along with the latter’s son-in-law, Batroun MP Gebran Bassil — also a former energy minister — have repeatedly traded barbs and accusations over their failure to agree on a new cabinet.

In a bid to break the deadlock, General Security chief Abbas Ibrahim, a heavyweight dealmaker who is often mentioned as a potential successor to Parliament Speaker Nabih Berri, has been leading mediation efforts in recent weeks.

Ibrahim met Tuesday with the head of the Maronite Church and presented him with his latest proposal. Patriarch Bechara al-Rai has upped the ante as the country’s collapse accelerates, playing a leading role in the negotiations between Hezbollah, Hariri and the FPM, while calling for the dissociation of Lebanon from regional conflicts.

According to Moustafa Allouche, a former Tripoli MP and close ally of Hariri, Ibrahim’s latest proposal, which has been presented to the president, takes the blocking third out of the equation, with both men unanimously picking the justice and interior ministers in an 18-member government.

“It is now up to Aoun to call Hariri and ask to meet him to discuss the proposal,” Allouche said, noting that the president has yet to reach out to the premier-designate in an attempt to mend bridges.

The source denied that Aoun and his camp were holding out for a blocking third, claiming that Hariri is merely using it as a smokescreen to hold up the formation of the government.

“Hariri cannot form the government without getting the green light from Saudi Arabia in terms of Hezbollah’s representation,” the source said.

Hariri has repeatedly denied being beholden to the Saudi kingdom, putting out a fiery statement last week saying that he “does not expect the approval of any external party to form the government, not Saudi Arabia or anyone else.”

Ibrahim is expected to meet with Hariri soon.

BEIRUT — As negotiations over the formation of a new government drag on, top politicians appear to have added a new angle: a high-stakes game of chicken over electricity supply — with the Lebanese people caught in the middle.“We are nearing a blackout and I don’t think that MPs will accept being witnesses to this situation,” caretaker Energy Minister Raymond Ghajar, an ally of the Free...

Rai criticizes those who want to 'impose' a president, Kaouk insists that consensus is the solution