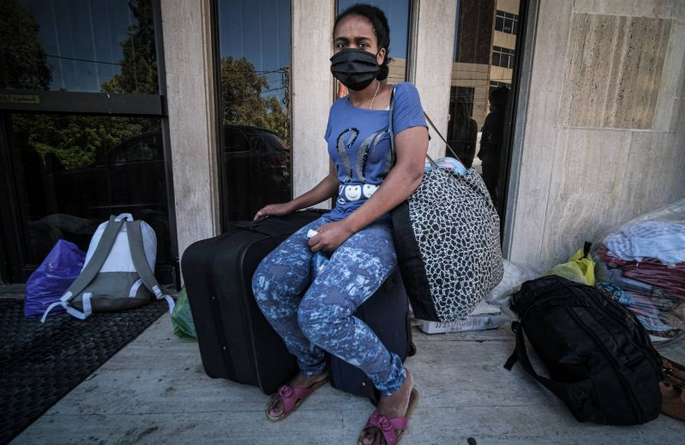 An Ethiopian domestic worker sits with her suitcase on the sidewalk in front of the Ethiopian Embassy in Hazmieh. (OLJ/Joao Sousa)

BEIRUT — Lebanon’s highest administrative court has put a temporary block on the first major step taken by the Lebanese government toward an overhaul of the much-criticized “kafala” sponsorship system for migrant domestic workers pending the result of a lawsuit by the lobby for recruitment offices that bring the workers to the country who are arguing that the Labor Ministry had overstepped its authority.

Last month, caretaker Labor Minister Lamia Yammine announced that she had signed off on a new standard labor contract for migrant workers that would significantly strengthen their rights.

Now, however, the new contract is in limbo after the Shura Council ruled to stop its implementation until a final verdict is reached in the lawsuit brought forward by the Syndicate of the Owners of the Worker Recruitment Agencies in Lebanon.

What is the kafala system and how would the contract have changed it?

An estimated 250,000 migrant domestic workers, most of whom are women from African and southeast Asian countries, were working in Lebanon before the economic crisis. (Since the economic crisis, many have returned home after their employers stopped paying or, in some cases, dumped them at their embassy door.)

The kafala system ties the legal residency of a migrant domestic worker to a specific employer. Other categories of foreign workers are also tied to a Lebanese sponsor, but only domestic workers are specifically exempted from the country’s labor law. Attempts by migrant workers to form a labor union have been blocked by national authorities.

Rights groups have documented widespread instances of physical and sexual abuse against migrant workers, as well as employers withholding or delaying payment of wages. Many employers also confiscate live-in domestic workers’ passports and forbid them from leaving the house on their days off.

The process that resulted in creation of the new standard contract began under previous Labor Minister Camille Abousleiman, who convened a working group under the auspices of the International Labor Organization in April 2019 to begin drafting short and medium-term proposed reforms to the kafala system.

The new labor contract was considered as a short-term reform, since the Labor Minister could issue it without going through Parliament or the cabinet.

Under the old standard work contract, migrant domestic workers could generally only leave their job or change employers if they could prove abuse or misconduct by their first employer.

Among the key provisions of the new contract, it would give workers the right to leave their employer at will with a month’s notice for any reason and immediately in cases of abuse or misconduct by the employer.

It also explicitly forbids employers from confiscating workers’ passports or forcing them to stay in the house on their day off and specifies that the worker’s room should be well lit and ventilated and equipped with a door that she can lock from the inside. And it mandates that domestic workers must be paid at least the national minimum wage (which is currently LL650,000). A related but separate decision set a maximum 30 percent deduction allowed for room and board provided by the employer.

Zeina Mezher, the ILO’s focal person on labor migration issues in Lebanon, said that while the ultimate goal is to change the labor law to give domestic workers the same legal protections as others, the new contract represented a "significant step forward."

"It protects domestic workers, but it's also pushing toward recognizing domestic work as work by aligning all the rights to the national labor law,” she said. “The contract stipulates basic human and labor rights as an attempt to create a relationship of respect toward domestic workers where the work becomes a choice associated with workers’ rights and dignity."

Why did the Shura Council temporary block implementation of the law?

On Sept. 21, the Syndicate of the Owners of the Worker Recruitment Agencies in Lebanon sued to stop implementation of the new contract and the separate decision by the Labor Ministry setting the maximum salary deduction for room and board.

The syndicate argued that Yammine had overstepped her authority given her caretaker status and that the decision violated Lebanese contract law by imposing mandatory terms on the parties as well as attempting to override the labor law by imposing the national minimum wage for domestic workers.

The Shura Council, in its Oct. 14 decision to suspend implementation pending the final results of the lawsuit, did not go into detail on the reasons for its ruling, simply stating that it appeared the conditions for halting the execution of the new contract were in place. Specifically, the council found that it appeared from the case file that the execution “might cause serious harm to the plaintiff” and that the complaint “is based on important and serious reasons.”

The syndicate’s president, Ali al-Amin, told L’Orient Today that he believed the contract had been pushed through in a rush and had not taken into consideration the feedback of the employers and recruiters. Amin said he believed the government should have negotiated contracts with the embassies of the workers’ countries rather than imposing across-the-board conditions.

“We are saying that this worker’s rights are sacred, and they should be sacred, and I don’t want to jeopardize her rights, but at the same time, I don’t want there to be no rights for the employer or for the recruiting office,” Amin said. “If you hit the recruiting sector, there won’t be any more work opportunities for the domestic workers.” He noted that recruitment had already all but halted over the past year.

The Shura Council decision drew widespread condemnation among advocates for domestic workers, even those who had felt the new contract did not go far enough or were skeptical that it would really be enforced.

“Migrant domestic workers are one of the most marginalized groups in Lebanon, and they are routinely subject to horrific instances of abuse, including forced labor and human trafficking,” Aya Majzoub, Lebanon researcher at Human Rights Watch, told L’Orient Today. “But instead of correcting this grave injustice and dismantling the system that allows for these workers’ enslavement and exploitation, the Shura Council prioritized the narrow commercial interests of the recruitment agencies.”

Nizar Saghieh, executive director of Legal Agenda, wrote that while the new contract represented “a small and limited step forward, the state council’s decision came to undermine this achievement, despite its limitations, and restore the status of domestic work to zero.”

Farah Baba, a spokeswoman for the Anti-Racism Movement, a group that pushes for migrant workers’ rights, said while she did not believe the contract on its own went far enough, the block by the Shura Council was “very dangerous.” However, she noted that among the migrant workers the group represents, the contract is not a top concern at the moment, particularly since many are trying to leave Lebanon.

“I think a lot of people in the migrant communities are mostly concerned with evacuation, and I think that’s why we haven’t heard a lot of feedback on the issue,” she said.

Yammine declined to comment on the Shura Council decision, via a spokesperson, but a ministry source said that she is preparing an official reply to the ruling.

However, given that a new minister will be taking Yammine’s place once the next government is formed, the next steps will likely depend on the leanings of the next minister.

Meanwhile, advocates said they will continue pushing for a legislative overhaul of the kafala system.

Clarification: This article was altered to clarify that the 30 percent maximum deduction from domestic workers' salaries for room and board was specified in a ministerial decision also being challenged in court, not in the contract itself.

BEIRUT — Lebanon’s highest administrative court has put a temporary block on the first major step taken by the Lebanese government toward an overhaul of the much-criticized “kafala” sponsorship system for migrant domestic workers pending the result of a lawsuit by the lobby for recruitment offices that bring the workers to the country who are arguing that the Labor Ministry had...